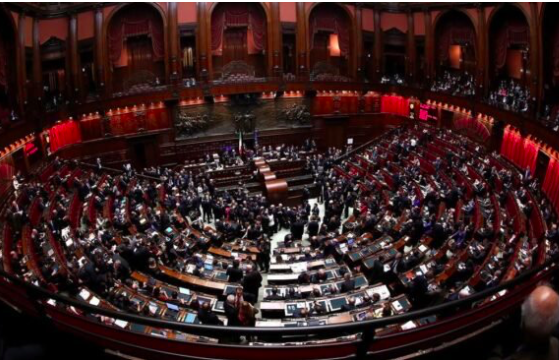 Italy votes to remove one in three lawmakers to save cost

Italians have voted to reduce one-third of the country’s lawmakers in order to save cost. Almost 70 percent of the citizens voted in favour of the mov

Italian scientists develop vaccine that claims to neutralise coronavirus in human cells
627 deaths, 5,986 coronavirus cases recorded in Italy in 24 hours
Coronavirus: Italy worst hit with over 1,000 deaths
Italians have voted to reduce one-third of the country’s lawmakers in order to save cost. Almost 70 percent of the citizens voted in favour of the move in a referendum which followed an earlier decision by the parliament.

Five Star Movement, the main party in Italy’s governing coalition, had said the measure will save an estimated €1 billion over 10 years. Luigi Di Maio, Italy’s foreign minister, reportedly described the outcome of the referendum as “historic.”
“The one achieved today is a historic result. Let’s go back to having a normal parliament, with 345 seats and fewer privileges,” he was quoted to have said, adding: “It is politics that gives citizens a signal.”

The vote comes comes amid the clamour for Nigeria’s federal lawmakers to introduce cost-saving measures either by reducing their pay or number. Despite being the country with the highest rate of extreme poverty globally, a senator reportedly earns as much as N13.5 million as running cost monthly, while a member of the house of representatives is said to earn N12 million monthly.

Among those calling for such cost-cutting measures is Rochas Okorocha, senator representing Imo west, who once argued that Nigeria does not need 109 senators and 360 members of the house of representatives.
“What are three senators doing that one senator cannot do?” he asked.

“Here, we have three senators per state. Over there (house of representatives), over there, we have 360 eligible human beings. This country must begin to make sacrifices and cut down the cost of governance.”

Over N70 billion spent as running cost for senators in the eighth assembly could transform the lives of Nigerians.
TheCable
Foreign 886 InCaseYouMissedIt 6159 Trending 6569 Italy 7 Lawmakers 2 Nigerians 8