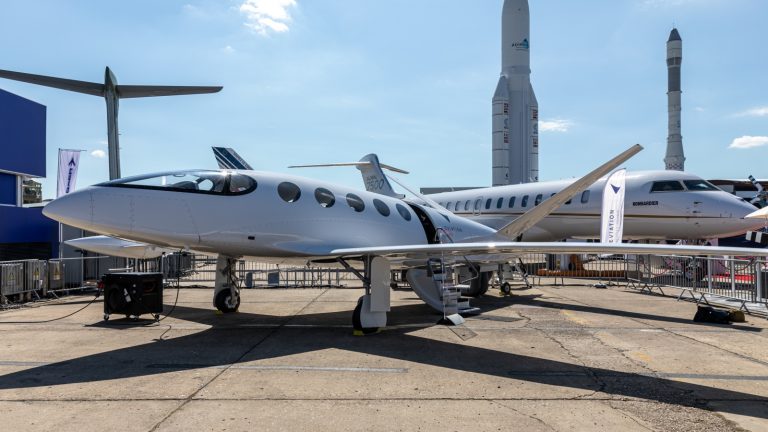 An Israeli air-carrier company, Eviation Aircraft, has unveiled the world’s first electric plane dubbed ‘The Alice’. Exhibited at the Paris Airshow, ‘The Eviation Alice’ is a whale-shaped sophisticated plane that is solely powered with a battery. The electric plane is said to have the capacity to fly nine passengers to about 650-mile range — about 1,000 kilometers — from a single charge.

The company had secured its first customer, Cape Air, an American regional airline that has agreed to buy a double-digit number of planes. More prospects for the electric aeroplane include major US carriers such as United Continental Holdings Inc. and JetBlue Airways Corp.

Omer Bar-Yohay, CEO of Eviation chief executive officer, said the interest in battery-powered planes is on the rise and his company is only preparing for this foreseen change.
“This plane was built first and foremost for the passenger’s flight experience,” Bar-Yohay told Channel 12 news.

“We planned and designed the plane around that. We’re a bit ahead of the pack but I have no doubt others are coming… We’ll have a supply issue, not a demand issue. The hurdles aren’t just about getting the plane out the door, but everything else that goes with them. We need an environment to support the plane and trained engineers and mechanics.”

According to its manufacturer, ‘The Alice’ is set to take its first flight later this year in the US. He also said that Eviation has plans to assembly more planes, then proceed to acquiring certification for the electric plane within the next two to three years. The transition from gas to electric propulsion is good for many reasons.

It will save millions in fuel and maintenance costs. It is also environmentally friendly; in that, it will reduce air pollution and noise levels.