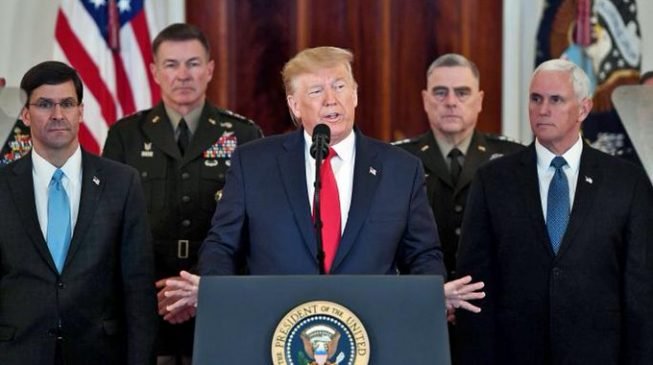 Iran standing down, US ready to embrace peace – Trump says

Following Iran striking back at  the United States early on Wednesday for killing its most powerful military commander, firing a barrage of ballistic

Following Iran striking back at  the United States early on Wednesday for killing its most powerful military commander, firing a barrage of ballistic missiles at two Iraqi military bases that house American troops in what was initially feared to become an escalation of the conflict, Trump has announced new economic sanctions against Iran and vowed once again, to prevent it from acquiring nuclear weapons.

He however did not offer any specifics of the additional punishing economic sanctions on the Iranian regime. But the President signalled that he did not intend to use military power in response to the missiles Tehran rained on US forces in Iraq’s Erbil and al-Asad air bases.
“The fact that we have this great military and equipment, however, does not mean we have to use it. We do not want to use it. American strength, both military and economic, is the best deterrent. Iran appears to be standing down which is a good thing for all parties concerned and a very good thing for the world,” Trump said in a televised address from the White House, flanked by top officials of his administration.

Trump said he would ask NATO (North Atlantic Treaty Organization) to play a larger role in West Asia, and urge the remaining signatories of the 2015 Joint Comprehensive Plan of Action (JCPOA, or the Iran nuclear deal) to withdraw, following the American pullout in 2018, to force Iran to sign a new agreement. The agreement is already unraveling, with Tehran announcing on Sunday that it would roll back the limit on the number of centrifuges used in uranium enrichment, one of its commitments under the agreement.

“The time has come for the United Kingdom, Germany, France, Russia, and China to recognise this reality. They must now break away from the remnants of the Iran deal, or JCPOA. The United States is ready to embrace peace with all who seek it,” Trump said.