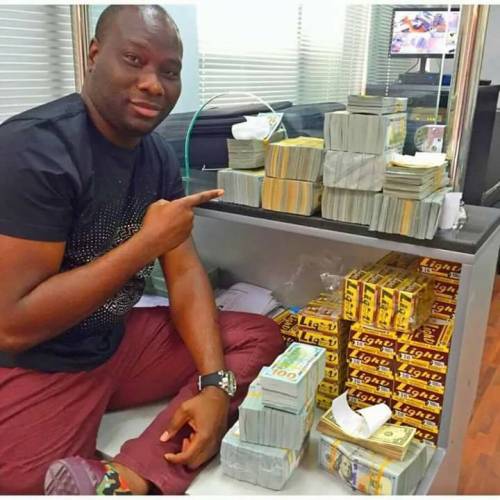 Instagram ‘billionaire,’ Ismaila Mustapha, more popularly known as Mompha, has now cleared the contents of his Instagram page, leaving what appears to

Fraud running into millions uncovered at LAWMA
Popular Lagos fashion entrepreneur, Tunde ‘Wear it All’ goes to jail for fraud
How Hushpuppi, gang defrauded 1,926,400 people and made N168bn

Instagram ‘billionaire,’ Ismaila Mustapha, more popularly known as Mompha, has now cleared the contents of his Instagram page, leaving what appears to be a motivation post.

The development comes days after the police authorities in Dubai shared footage of how his colleague in the fraud business, Hushpuppi, was taken down in a special operation over alleged cyber-fraud involving 1.9 million victims to the tune of N168 billion.

Hushpuppi, whose real name is Raymond Igbalode, was arrested on June 10, alongside 11 of his associates for committing crimes like money laundering, hacking, impersonation, scamming, banking fraud and identity theft.

As part of an operation dubbed ‘Fox Hunt 2’, the Dubai police said they had cracked the case and staged synchronized raids at midnight after monitoring the gang’s “social media accounts”.

At about the same time when Hushpuppi was arrested, Mompha, who appeared not to be in good terms with Igbalode — due to an altercation between them on social media — had taken to his Instagram page to advise people not to celebrate one’s shortcomings as no one knows tomorrow.

“Never mock anyone who is facing a trail case cos you don’t know tomorrow. For those who are worried about me am safe and sound. No shaking, God never disappoint his own,” he wrote on June 10.

However, due to the money laundering allegation earlier brought against Mompha, who like Hushpuppi, likes to flaunt his wealth and luxury lifestyle on social media, Nigerians began trolling him online.

Apparently cheesed off, the self-acclaimed Bureau De Change agent poured out his annoyance at those drawing the attention of the Federal Bureau of Investigation (FBI) and the International Police (Interpol) to him.
“O Allah, please grant every believing man and woman: Your mercy, Your guidance, Your blessings and Your forgiveness (Amin),” he wrote in an expletive-laden post.

“JUMMA’AT Mubarak ??!!! Note: For those id**ts tagging fbi and interpol on my page and saying you are next na thunder go fire those hand you use in typing by the special Grace you id**t think fbi or interpol dont know mompha you must be really sick f**king hypocrites they never mind their business B**tards!!”

Nearly three weeks later, the controversial figure took to his Instagram page deleted all pictures showcasing his fleet of expensive cars and his luxury home furniture.

The Economic and Financial Crimes Commission (EFCC) had earlier arrested him over alleged N32.9 billion money laundering while he was about leaving the Abuja airport for UAE. He would later be released after the federal high court in Ikoyi in Lagos, had granted him bail in the sum of N100 million in bond.

His latest stunt also comes after the FBI had published a slew of photos and sought assistance in finding six Nigerians who were indicted for fraud by the United States.