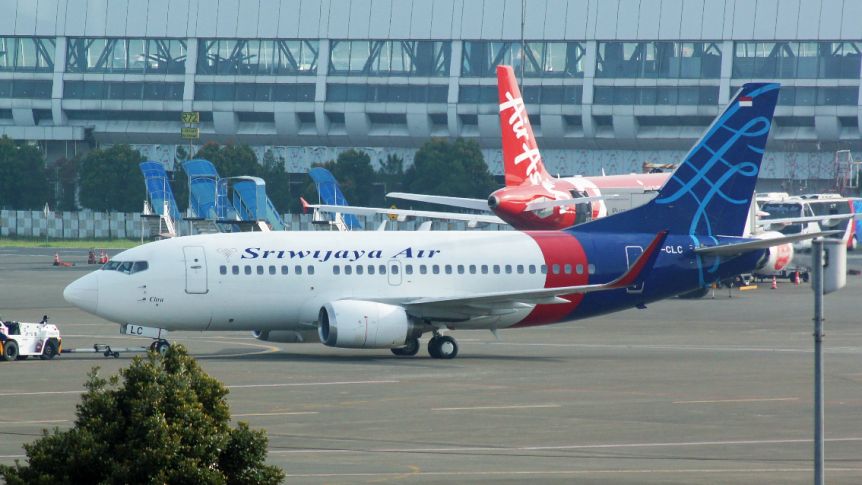 Plane carrying coronavirus medical supplies crashes
One dead, 157 injured as Turkish plane breaks into three
I jumped out of the plane –   Survivor of Pakistan plane crash

A 27 year old Boeing 737-500 Sriwijaya Air plane carrying 62 people on board has lost contact after taking off from Indonesian capital Jakarta on Saturday en route to the city of Pontianak in West Kalimantan province.

FlightRadar24 data showed the aircraft apparently lost more than 10,000 feet of altitude in less than one minute shortly after departure from Jakarta.

A statement released by the airline said the plane was on an estimated 90-minute flight from Jakarta to Pontianak, the capital of West Kalimantan on Indonesia’s Borneo island.

“We have found debris which is suspected to be from the missing Sriwijaya flight, which we have now seized. But we are currently facing an issue of visibility because it’s night time. We will try our best to find the exact location and coordinates of where the flight fell and tomorrow morning, and can continue the search in our maximum capacity,” he said.

The depth of the ocean surrounding the search area is around 20 to 23 metres deep, he added.

Surachman, a local resident of Indonesia’s Thousand Islands, told local media that fishermen found what appeared to be the wreckage of an aircraft in waters north of Jakarta and a search was underway. Surachman told CNN Indonesia that residents heard two loud explosions which residents initially thought was lightning before he went to the water to investigate.

“Initially I received reports from fishermen, two of their boats saw an explosion from the sea twice when it was still raining at 2:00pm [local time]. Currently I am still at the scene of the incident in the middle of the sea. We are looking for evidence using an anchor,” he said.

Surachman said the location of the incident was 15 minutes away from Lancang Island, one of the islands which make up Indonesia’s Thousand Islands district. He said the water condition was relatively murky.

“We found some cables, a piece of jeans, and pieces of metal on the water,” Zulkifli, a security official, told CNNIndonesia.

A crisis centre has been set up at Jakarta’s Soekarno-Hatta International airport, local media reports.

The airline has a solid safety record until now, with no onboard casualties in four incidents recorded on the Aviation Safety Network database, though a farmer was killed when a Boeing 737-200 left the runway in 2008 following a hydraulic problem.

A Boeing spokeswoman said: “We are aware of media reports from Jakarta, and are closely monitoring the situation. We are working to gather more information.”

A Boeing 737 MAX operated by Indonesian airline Lion Air crashed off Jakarta in late 2018, killing all 189 passengers and crew. The plane that lost contact on Saturday is a much older model.