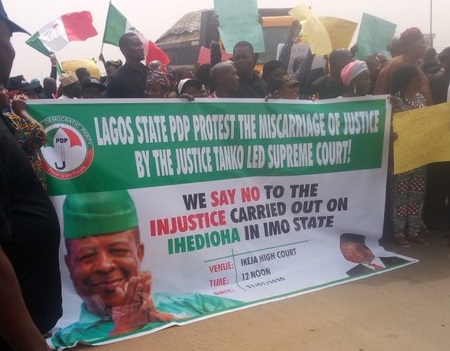 Members of the Lagos State chapter of the Peoples Democratic Party on Tuesday staged a protest against the Supreme Court judgment which ousted Emeka Ihedioha as the governor of Imo State. Clad in black clothes to symbolise mourning, hundreds of the PDP members, who walked from their secretariat along Adekunle Fajuyi Road to the state High Court in Ikeja, said the judgment was a miscarriage of justice.

In a ruling that has caused ripples across the country, the Supreme Court had last Tuesday sacked Emeka Ihedioha of the PDP and pronounced Hope Uzodinma of the All Progressives Congress as the winner of the March 2019 governorship election.

But the Lagos State Chairman of the PDP, Mr Deji Doherty, who led other chieftains and members of the party on the march, said the judgment has thrown the party into mourning. According to Punch, the aggrieved party members carried placards with different inscriptions such as, “Ihedioha is the People’s Governor”, “APC/ Buhari allow democracy to thrive, that is why you are there today. Do not destroy it before you leave”, “Buhari/APC should sign the electoral amendment law,” “Buhari don’t destroy the judiciary, Imo State is not for sale.”

Doherty said the Supreme Court judgment has destroyed the trust and sympathy Nigerians had for the judiciary.
“I am sure if an inquest is conducted concerning the issues that had led to this judgement, we would find out the unimaginable inconsistencies that must have played out during the deliberations between the member judges that superintend the Supreme Court,” he said.

“However, for us in the PDP, it isn’t the end of the world but the beginning of a new chapter in the history of our democracy in Nigeria and a call for us as a party to go back to the drawing board and re strategise. Unfortunately, this isn’t what our founding fathers envisaged when they gave us the constitution that is supposed to be our guide to ensure that we do the right thing.

“A dark cloud of uncertainty has suddenly covered the skies above our dear country. Consequently, the peace, freedom and prosperity we all enjoyed in our country during the PDP years is gradually diminishing as we continue with the Buhari/APC led administration. “

Also speaking, a former Minister of African Integration, Dr Abimbola Ogunkelu, urged the Supreme Court to reverse the ruling.
“The Supreme Court can still revert itself because the judgment does not urgur well for the epic court which happens to be the last hope in judicial matters in the country to give a ruling that is not convincing,” he said.

The party Chairman later presented a letter to the Lagos State Chief Judge for onward presentation to the Supreme Court.