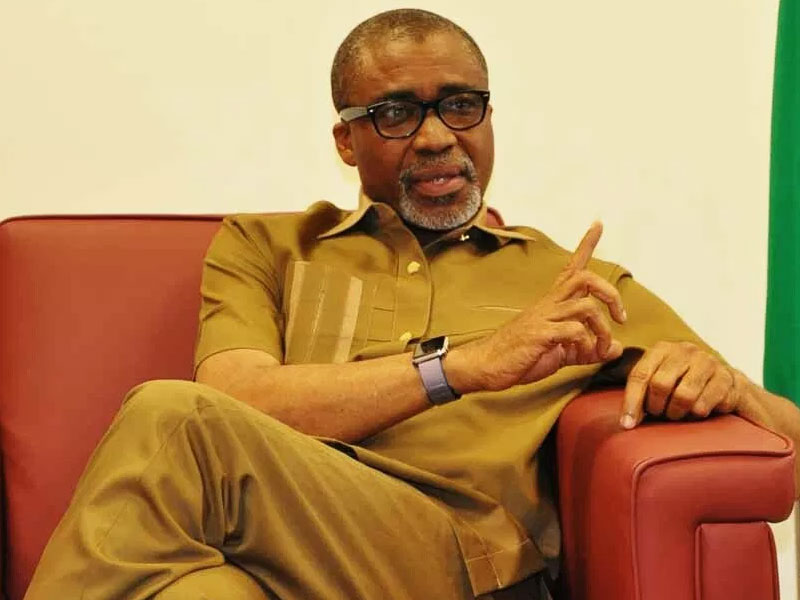 Founder, Church of Satan involved in police station burning – Command
Lagos searches for 60,000 HIV victims who absconded from treatment
I am still in ADP but supporting APC’s Adelabu – Alao Akala

Igbo Renaissance Forum, a pan Igbo group, has vehemently condemned the call by the Arewa Youth Consultative Forum, AYCF, for Senator Enyinnaya Abaribe, the minority leader in the Senate, to be arrested.

The AYCF, in its reaction to a court order to detain Senator Ali Ndume for failing to produce Abdulrasheed Maina, former Chairman of the defunct Pension Task Team in court, had questioned the authorities’ refusal to arrest Senator Abaribe who stood as surety for Nnamdi Kanu.

But in a statement signed by its International Coordinator, Nze Ugo-Akpe Onwuka (Oyi), the Igbo group said it was baseless comparing Abaribe’s situation with that of Ndume.

The statement reads, “We wish to express our deepest disappointment at the grossly unfortunate call by the Arewa Youth Consultative Forum, AYCF, for the arrest of Senator Enyinnaya Abaribe following the order of a court to remand Senator Ali Ndume in Kuje Correctional Centre, over his failure to produce Maina in court.

“We want to unequivocally state that such a hatchet job by a Youth organization is a terrible development at this stage of our national life. It is sad that Alhaji Yerima Shettima is still stuck in his tribal quandary, and has been so blinded to see things from objective and realistic national perspectives.

“It is sad and heartbreaking that the instead of commending the court for taking such an action that would deter other looters in the Nigerian state in line with the Federal Government’s push for zero tolerance to corruption, this youth leader veered dangerously off course and started making demands that ultimately makes corruption look like a noble venture.

“We would not hesitate to advise Alhaji Yerima Shettima to retrace his steps and cease from being used as a hatchet man. We call on President Muhammadu Buhari to take immediate actions to prevent the desecration of the judiciary by such unguarded and vexatious narratives from tribally sequestered minds.

“It is very pertinent to note that if such rhetorics are ignored and those who propagate such divisive and unintelligent narratives are allowed to go scot free, it would surely embolden such myopic and tribally twisted elements to rubbish the judiciary and other arms of government in future.

“IGBO RENAISSANCE FORUM demands that Alhaji Yerima Shettima be made to withdraw his putrid statement which goes to paint the judiciary in a very terrible light. Comparing the case of Senator Enyinnaya Abaribe to that of Senator Ali Ndume is a classical case of comparing apples to oranges, and this can only happen where intelligence has been suspended based on pecuniary interests.

“Finally, we want to state that we would not stand by and watch hired hands raise questionable issues with the ultimate aim of targeting Senator Enyinnaya Abaribe for harassment.”