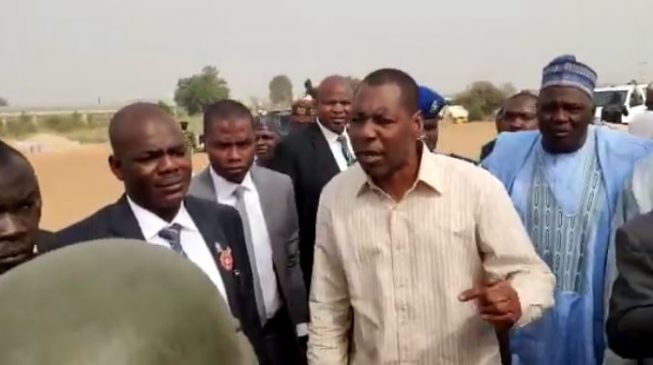 If you can’t do your job, we’ll mobilize hunters – Zulum to Nigerian army

Governor of Borno State, Babagana Zulum, has blasted the Nigerian Army following an attack on his convoy in Baga, a town under Kukawa Local Government

Governor of Borno State, Babagana Zulum, has blasted the Nigerian Army following an attack on his convoy in Baga, a town under Kukawa Local Government Area on Wednesday night. The governor was on his way to some internally displaced persons camps in the Northern part of Borno when the incident happened.

Though the attack was repelled by security operatives in the governor’s convoy, there were casualties on the side of his entourage. A furious Zulum thereafter confronted the Commanding Officer in Mile 4, mincing no words in expressing his disappointment at the inability of the military to rid Baga and environs of insurgents.

“We have over 1,181 soldiers in Baga; 72 officers, 107 solders, 400 soldiers in mile 4 and 1,900 soldiers in Monguno. I see no reason why Boko Haram will stop operate in Baga town. The troops have been in mile 4 for over one year, there is complete sabotage, the problem is not with President Buhari, or General Burutai but the command and control structures. There is need to look into command structure.

“We have over 80,000 IDPs in Monguno, they cannot continue to depend on NGOs and others for food, we have created opportunity for them to go back to their communities and continue with their business and farming activities. After Sallah, we will go back to Kukawa. We will give time to the military; but if they will not clear Baga, we will mobilise our hunters and vigilantes to recapture Baga… we can’t continue like this. People have take their destiny in their hands.”

After donating 12 patrol vehicles to security operatives in the area, Zulum also flagged off the reopening of the Monguno-Baga highway after a two-year closure.  Zulum, who had earlier been briefed by the troops that Baga was free of Boko Haram insurgents, returned to ask what led to the attack on his convoy.

Reacting to the attack, Sagir Musa, army spokesman, said details of the incident are sketchy and efforts are ongoing to comb the scene of the attack.
“An investigation is also in progress to identify the circumstances that led to the attack. Regrettably, this is an isolated and most unfortunate incident that occurred in a territory where normalcy has since been restored with socio-economic activities picking up. The Nigerian army wants to reassure the general public that this will be interrogated with a view to forestalling future recurrence,” he said.

Over the months, the governor has had face-offs with the troops in the state. In January, he accused the troops of extorting road users.