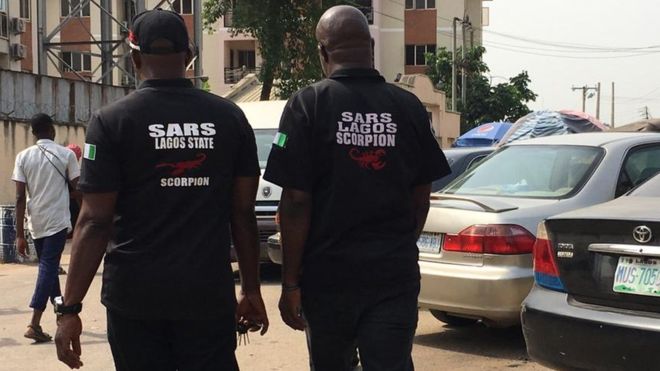 How SARS tortured me with hot iron for N500,000 bribe – Petitioner

A 30 year old man, Mr. Ayotomiwa Elegbeleye, has told the Ekiti State Judicial Panel of Inquiry into allegations of police brutality how operatives of

Omokri launches fundraiser for man whose son was killed by SARS in Delta
I regret forming SARS, among them are armed robbers – Officer who championed SARS formation during Buhari regime
Woman tells Abuja panel how SARs killed, seized her brother’s corpse

A 30 year old man, Mr. Ayotomiwa Elegbeleye, has told the Ekiti State Judicial Panel of Inquiry into allegations of police brutality how operatives of the disbanded defunct Special Anti-Robbery Squad (SARS) tortured him for bribe. The petitioners said he was hanged and tortured with hot pressing iron for not offering N500,000 bribe.

Elegbeleye said he was arrested by eight SARS operatives in his home at Ikere-Ekiti on January 7, 2020, around 11:55 p.m and was taken to their custody where he was repeatedly tortured for an offence did not commit. According to him, he was hanged with a rod while in custody while officers tortured him with hot pressing iron for 23 days for his failure to offer N500,000, which the operatives requested for to secure his release.

The petitioner, who was brought from the Ado-Ekiti correctional facility, showed members of the panel the bodily injuries he sustained from the hot pressing iron the operatives used on him. He said: “I was arrested by the SARS operatives around 11:55 p.m in my house in Ikere-Ekiti without them telling me the crime I committed. That night, I was taken to their office. They beat and tortured me with pressing iron, that I should confess to being an armed robber.

“I was hanged up with a rod. I gasped for breath, begging them to release me, but they said I would only be released after the payment of N500,000. After 23 days in their custody and with serious bodily injuries, they took me to the police hospital in Oke-Isa, when they felt I might die due to my worsening health condition,” he said.

Elegbeleye, who maintained that he was never involved in any criminal activity, pleaded with the panel to investigate his case so that he could get out of prison.
“I came to the panel for them to assist me in getting justice from this suffering I am passing through for an offence I don’t know anything about. I need urgent medicare now because I am having serious difficulty in breathing due to the way I was beaten by the SARS officers,” he said.

Counsel to the police said a case of alleged conspiracy, murder and armed robbery against the complainant was before the State High Court. But Elegbeleye’s lawyer, Layi Obisesan, argued that his client was before the panel to seek justice over the brutality he suffered in the hands of the SARS operatives.

Chairman of the panel, Justice Cornelius Akintayo (retd.), adjourned the sitting till December 3. He urged the parties to present their witnesses on the adjournment date