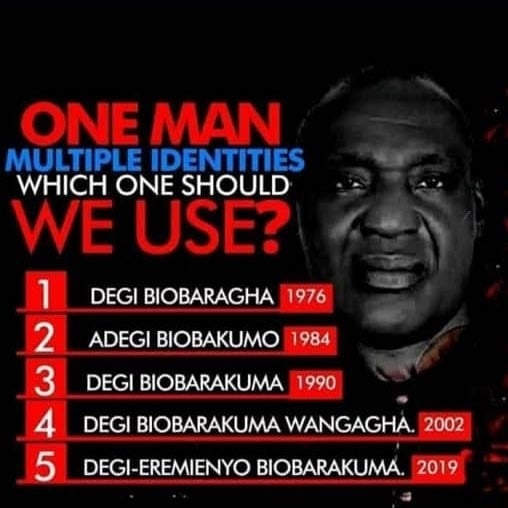 It is no longer news that the Bayelsa State All Progressives Congress governorship candidate David Lyon’s hope of assumption of office on Friday (today) as the fifth governor of the state and his running mate, Biobarakuma Degi-Eremienyo, who were already preparing to be inaugurated into office, was on Thursday dashed by a judgment of the Supreme Court.

A five-man panel of the apex court led by Justice Mary Peter-Odili ordered the Independent National Electoral Commission to withdraw the Certificate of Return issued to the All Progressives Congress’ candidates as the winners of the November 16, 2019 governorship election in the state.

In what appeared to be a twist of fate, as the apex court was delivering the judgment, Lyon was rounding off preparations for his inauguration. As part of the preparations, the ex-governor-elect did a rehearsal at the Samson Siasia Stadium, where he was driven round the main field in a motorcade on Thursday.

However, the real crux of the matter is the multiple names Degi-Eremienyo, the supposed deputy had on the documents of academic qualifications with about nine variations of names which were different from the name which appeared on his Form CF001 submitted to the electoral commission. The names on the different documents attached to his Form CF001 were said to be, Biobarakum Degi-Eremienyo, Degi Biobaragha, Degi Biobarakuma, Adegi Biobakunmo, Degi-Eremienyo Wangagha.

According to Punch, Degi was said to have claimed to have obtained “his First School Leaving Certificate in 1976”  and presented to INEC “a First Leaving School Certificate of one Degi Biobaragha other than the one bearing his name Biobaragha Degi-Eremieoyo as shown in his INEC Form CF001”.

He was also said to have claimed to have “obtained his West African Examinations Council General Certificate of Education in 1984” and presented to INEC, “a GCE certificate of one Adegi Bibakuo other than the one bearing his name Biobarakuma Degi-Eremieoyo as shown in his INEC Form CF001.”

The Federal High Court had held that there was no evidence to prove that the documents with different name variations were his. Upholding the finding on Thursday, the apex court held that the affidavits of correction of names and regularisation of names filed by him were not enough as he ought to have followed the laid down legal procedures.

It held that “clearly, the lower court erred when it held that the affidavit of correction of names sworn to by the first defendant” had corrected the numerous discrepancies in his names in August. He said, “Section 182(1)(j) of the 1999 Constitution provides that nobody shall be qualified for an election for the governor of a state if he has presented a forged certificate to the Independent National Electoral Commission”, adding that “the word fraud” could mean “fabricating, framing and inventing false identification and making deliberate falsehood”.

The Supreme Court ruled that the votes credited to the APC’s candidates were wasted. It ordered INEC to withdraw the certificates of return issued to Lyon and Degi-Eremienyo as the winners of the poll. It ordered fresh ones to be issued to the governorship and deputy governorship candidates of the party with the highest votes and met the constitutional spread of votes in the election. It also ordered the newly declared winners of the election to be sworn in at the appropriate time.