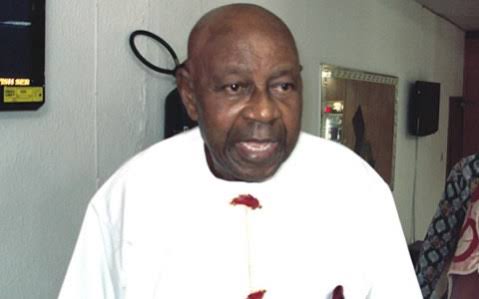 It is no longer news that Professor Tamunoemi Sokari David-West, more popularly referred to as Tam David-West, a consultant virologist of national and

British PM names son after doctors who treated him for COVID-19
I was paid N210,000 to use undergraduate for money rituals – Pastor
Court orders forfeiture Diezani’s jewellery worth $40m

It is no longer news that Professor Tamunoemi Sokari David-West, more popularly referred to as Tam David-West, a consultant virologist of national and international standing and lecturer at the University of Ibadan for decades, is dead.  He died at the University College Hospital, Ibadan on Monday at about 11 am, 11 days after he was admitted at age 83.

News of his transition was conveyed in a tribute by his friend, President Muhammadu Buhari. David-West was Petroleum minister when Buhari was a military head of state between 1984 and 1985, at a time oil prices slumped to about $10 a barrel. David-West and his boss came up with a policy of ‘counter-trade’, to sell Nigeria’s oil.

Before he became a Federal minister in 1984, David-West served as Commissioner of Education in the old Rivers State. He also served as Minister of Mines, Power and Steel under Gen. Ibrahim Babangida regime.

In an interview with TheNEWS magazine last year August, when he clocked 82, Tam David-West, expressed disillusionment about Nigeria. He was disillusioned by what the nation has become, about the high level of poverty and the ethnic divisions in the country. He was particularly disillusioned about the selfish political leadership that was not delivering the goods to the people and also the followership, that had failed to hold the leaders to account.