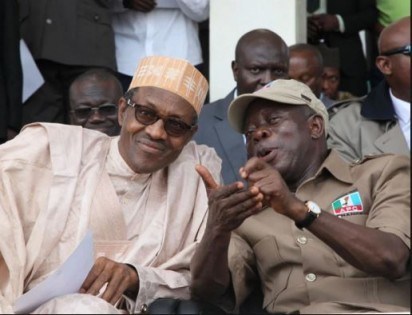 Adams Oshiomhole has scored President Muhammadu Buhari high as his administration recently marked its 100 days in office adding that the president should no longer be referred to as ‘Baba Go slow,’ but ‘Baba Go Fast’. The APC national chairman made a comparison of Buhari’s first 100 days in office in 2015 and 2019.

According to Oshiomhole, Buhari is now ‘Baba fast’ as opposed to his first tenure when he was labelled ‘Baba go slow.’ Speaking in Abuja on Friday, September 6, the party’s national chairman, Adams Oshiomhole, said Buhari had done well in his first 100 days in office. He said the president can be referred to as ‘Baba Fast’.

This was disclosed in a statement by its national publicity secretary, Mallam Lanre Issa-Onilu. Buhari had been labelled “Baba go slow” during his first tenure by those not satisfied with his pace at taking action. The statement read: “President Buhari can beat his chest to say he has started well, he has started fast.

“You cannot call him Baba go slow now, this time he is Baba fast.”Everything is about comparison, because in 2015, after a hundred days we did not have a federal cabinet, the president had not appointed ministers. This time in hundred days, from my interaction with a number of ministers, even the budget for 2020 is already being prepared.

“Ministers have been assigned to their various ministries. They have already started the process of taking over and trying to understand the challenges. Government is already effectively on ground,” the statement quoted Oshiomhole as saying.