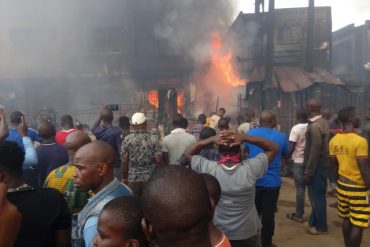 No fewer than five persons lost their lives in the Wednesday tanker fire in Onitsha, Anambra State. While a woman and her child had been confirmed dea

Over 100 countries demand probe into origins of coronavirus in China
Data from INEC’s server showed Atiku beat Buhari with 1.6m votes
‘I stand by my story’ — The Nation reporter says on Miyetti Allah interview

No fewer than five persons lost their lives in the Wednesday tanker fire in Onitsha, Anambra State. While a woman and her child had been confirmed dead, three others were said to have died at different locations in the area.

Also, forty buildings and scores of shops were torched in the disaster caused by the derailing of a tanker loaded with petrol.
“Over 500 lock-up shops were gutted by fire on Iweka Street Market leading to Ochanja and Menax markets. The incident started when a tanker laden with petrol lost control around Toronto Hospital and veered off the service lane. The tanker fell from the vehicle and went up in flames after spilling its content,” a source said.

It was gathered that the woman carrying her baby tried to jump out of her shop, but missed her steps and fell into a gutter raging with fire. Residents, including the old and children in most of the buildings, were trapped as youths had a hectic time rescuing them.

An eyewitness who said the fire started at about 10 am, explained that there was no presence of fire service personnel on hand. Only after five hours did the fire service department of nearby Delta State arrive to put out charred remains of the inferno. 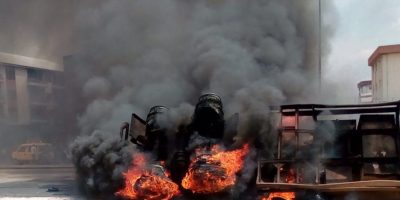