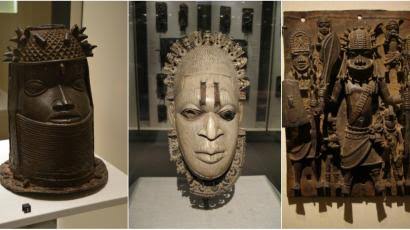 The Federal Government has launched the campaign for the return and restitution of Nigeria’s looted and smuggled artifacts from around the world. “

Bisola responds to Thin Tall Tony being a married man
9ice set to give marriage a third trial
Why we arrested popular Dubai based business man, Mompha – EFCC

The Federal Government has launched the campaign for the return and restitution of Nigeria’s looted and smuggled artifacts from around the world.

“With this announcement, we are putting on notice all those who are holding on to Nigeria’s cultural property anywhere in the world that we are coming for them, using all legal and diplomatic instruments available. Gentlemen, we are under no illusion that this will be an easy task, but no one should also doubt our determination to make a success of this campaign,” the Minister of Information and Culture, Alhaji Lai Mohammed said.

Alhaji Mohammed said Nigeria cannot imagine by what logic an Ife Bronze or a Benin Bronze or a Nok Terracotta can belong to any other part of the globe except to the people of Nigeria, whose ancestors made them.
“We have never laid claim to the Mona Lisa or a Rembrandt. Those who looted our heritage resources, especially during the 19th century wars, or those who smuggled them out of the country for pecuniary reasons, have simply encouraged the impoverishment of our heritage and stealing of our past,” he said.

The Minister said these timeless and priceless pieces of work are an important part of the nation’s past, its history, and heritage resource, and that allowing them to sit in the museums of other nations robs Nigeria of our history. He said in its quest to diversify the economy by leveraging on the culture and tourism sector, the government considers these priceless artifacts as critical components of the diversification drive.

Alhaji Mohammed said in launching the campaign, Nigeria is emboldened by Article 4 of the UNESCO 1970 Convention, to which most nations subscribe, which identifies the categories of cultural property that form part of the cultural heritage of each member state, thereby belonging to that State. He said by the provisions of the Article, they include cultural property created by the individual or collective genius of nationals of the State concerned, and cultural property which has been the subject of a freely agreed exchange or received as a gift or purchased legally with the consent of the competent authorities of the country of origin of such property.

The Minister also said the Heads of State and Government of the ECOWAS Region met in December 2018 in Abuja and adopted a Political Declaration on the return of cultural property to their countries of origin, adding: “We are bound by this Declaration, which has further brought discussions towards a Plan of Action.”

He called on every museum and person holding on to the nation’s heritage resources anywhere in the world to initiate dialogue with the federal government, saying: ”We urge them to identify what is in their collections, transparently make them public, approach us for discussion on terms of return and restitution, as well as circulation and loans. They must acknowledge that ownership resides in us. They must be ready to sign agreements and Memoranda of Understanding in this regard, and they must be ready to release some of these antiquities for immediate return to Nigeria.”

He said the government will kick-start the campaign for the return of artifacts with a quest to retrieve the Ife Broze Head, which was one of the items stolen in 1987 when one of the country’s national museums was broken into.
“After it was brought to an auction in London two years ago, the auction house observed that it was an Ife Bronze Head which belongs to the ICOM (International Council of Museums) Red List of cultural goods that are deemed to be the most vulnerable to illicit traffic. Now, the London Metropolitan police has seized the object, and it has invited Nigeria to make a claim, otherwise they will have to return it to the fellow claiming ownership. We have now started work on the return of the Ife Bronze head to Nigeria.,” the Minister said.

Meanwhile, the Federal Government has expressed delight at the decision of the Cambridge University’s Jesus College to repatriate the Benin Bronze Cockerel, known as ‘okukor’, to Nigeria.
“Considering the hundreds of artifacts, like the Benin Bronzes looted during that occupation, the decision to return the cockerel is like a drop in the ocean, but it is an important drop and we welcome it,” the Minister said.