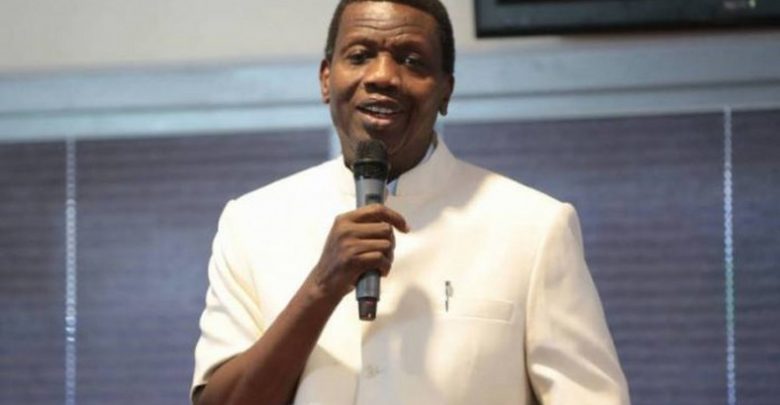 Rape scandal: Pastors must flee all appearances of evil – Adeboye

Pastor Enoch Adejare Adeboye, the General Overseer of the Redeemed Christian Church of God, RCCG,  has spoken about the rape allegation leveled agains

Catholics protest as two priests, 17 others, slain by herdsmen buried
Why I stopped being Fatoyinbo‘s spiritual father – Rev. Oset
My husband is not a rapist – Omodele Fatoyinbo

Pastor Enoch Adejare Adeboye, the General Overseer of the Redeemed Christian Church of God, RCCG,  has spoken about the rape allegation leveled against Pastor Biodun Fatoyinbo of the Commonwealth of Zion Assembly, COZA, by singer, Timi Dakolo’s wife, Busola Dakolo He was accussed of raping her twice as  minor.

Adeboye who spoke during a service at the Redemption Camp, stated that he doesn’t have much to say other than what the Christian Association of Nigeria, CAN, and the Pentecostal Fellowship of Nigeria, PFN, have said.
“I don’t want to comment on some happenings… Like I’ve always told you when people say ‘why don’t you talk?’. I say I’m under authority. The Redeemed Christian Church of God belongs to CAN and we belong to PFN. And in CAN we have a president, in PFN we have a president. Whatever they say, that’s what I’ve said. That’s why I kept my mouth shut”, he said.

Since the news broke out, many Nigerians including notable pastors have aired their opinions and also called for an investigation to be carried out to ascertain the truth of the matter that allegedly happened 20 years ago. Pastor Adeboye also had a word of advice for aspiring ministers of God. According to him, there’s nothing hidden that shall not come to the open. He went on to warn them that their sins will surely find them. While he didn’t mention name, he quoted copiously from the bible, saying everything that has been done in secret will be revealed; no matter how long it takes.

See the full statement of Pastor Adeboye below:

I have kept my mouth shut but I feel compelled to say some things to those who young, upcoming ministers of God. Everything I will say is from the bible so if you want to criticise what I have said, you have to criticise the bible. It is written, there is nothing hid that shall not come to the open or made manifest (Mark 4:22). It doesn’t matter how long, you think you’ve done something and it is covered that it will never come to the open? Then you can go and throw away your bible because the one who said this is Jesus Christ. There are people who think that people like me are old fashioned. I agree, I am old fashioned and I am old fashioned because Jesus is old fashioned. God is not fashionable, he only wears light.

The bible says if the devil comes to fight you, stand and fight. Resist the devil and he will flee from you. But according to 2nd Timothy 2: 22, when you find yourself facing youthful lust, don’t wait to fight, flee. When you see a sister smiling at you in a coy way, run. Don’t say I’m a great man of God, I’m highly anointed; ask Samson. I know that you will say ‘he has come again, he is an old fashioned man’, I agree. That is what they call me when I say that I will never have a private secretary who is a woman. The private secretary has to be a man because when a woman accuses you of something, nobody is going to listen to you. They will listen to the woman.

When you say where is witness, sister will say do they invite people to such things? When you say ‘how can it be me’? Everybody will say how come it is you that she has mentioned of all the men?

I am old fashioned but I was ordained in 1975 and I’m still surviving. It is better to be old fashioned and live than to be modern and die. I have not said anything, only the bible has been speaking.

Fatoyinbo has since taken a leave of absence from the church.