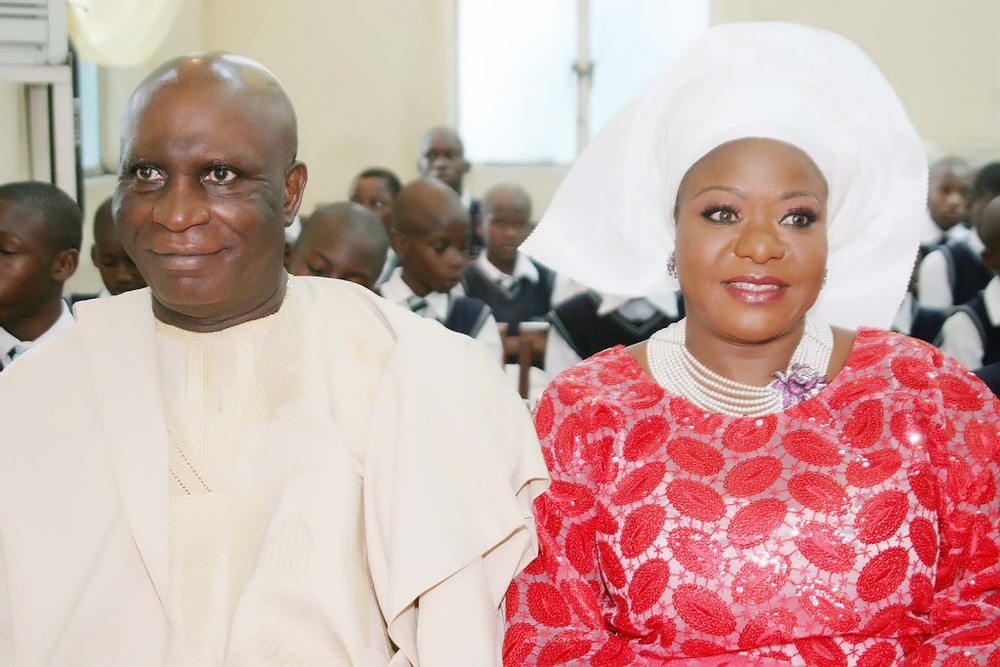 After many months of family squabbles, back-biting and mutual distrust, the 17 year-old marriage of Nigeria’s immediate past High Commissioner to the

After many months of family squabbles, back-biting and mutual distrust, the 17 year-old marriage of Nigeria’s immediate past High Commissioner to the United Kingdom and retired Supreme Court Justice, H.E. George Adesola Oguntade and wife, Chief (Mrs) Modupeola Wemimo Oguntade, has hit the rocks.

Things fell apart for the celebrated couple shortly after they returned to Nigeria following their three year stint in the UK, as Modupe was sent packing from their Lekki, Lagos home on Thursday, October 15, 2020. Her exit that day occurred after a serious altercation which led to her stuffing her belonging and valuables into many suitcases, hurling them into a waiting pick-up van and driving out of the premises.

Apparently, the marriage had faced challenges from the outset and chief among the problems was the stiff opposition mounted by Oguntade’s children whose names are: Abosede Snr., Abimbola, Folu (SAN), Deola, Daniel, Yetunde Abosede Jnr and Jide.

For some inexplicable reasons, the children made their opposition to their father’s choice for second wife very obvious. They were far from accommodating, and it was no surprise that Mrs. Oguntade too kept them at arm’s length. Then began the battle for Justice Oguntade’s heart and attention.

Unknown to the children, Justice Oguntade had always known Mrs Oguntade, who was previously married to Dr. Jimi Okunola Aina) for whom she bore all her three children: Jimi, Ayodele and Folusho. The duo actually met in 1961 through her uncle, Alhaji Nurudeen Shitta-Bey, the 7th Seriki Musulumi of Lagos.

Modupe, who was a toddler then had come to see her uncle off to England at Apapa Wharf and Oguntade was also there to celebrate with his friend. So when George and Modupe reunited, it was a case of deep respect, devotion and love. She was so respectful that she calls him “Baba” (father) due to the age difference between them.

In no time, the duo became one of the most celebrated couples on the Lagos social scene on account of the status of George as well as the powerful fashion statement that was always made by Modupe his wife stand out.

Over time, Modupe seemed to have settled into her role and along the line too, she was able to win over one of her step daughters, a move that caused rancour between the children.

Despite this and many more reasons, Modupe doted on the husband, and his children didnt find it funny especially because he stood firmly by her. Modupe was fully in charge and when her step children visited, they would be welcomed downstairs. They did not have the temerity to venture to the upper chambers of the house.

In 2017, Justice Oguntade got the juicy appointment of Nigeria’s High Commissioner to the United Kingdom. For his wife, moving to London was an opportunity to take complete charge of her man and flourish, away from her pesky stepchildren. The children on the other hand were in a state of panic; they felt this would further alienate them.

They allegedly began to spread words to family members and friends that they needed better access to their father because Modupe had not been doing a good job of caring for him. They even said she was bullying the old man. They  accused Modupe of extortion, high-handedness and worse of all, infidelity. She was described as debauched and decadent.

The stories still did not abate as preparations began for the March 10, 2020 80th birthday celebration of her husband but the event seemed to have ignited the bile within the Oguntade family and that was when the cookie crumbled.

As the Matron of the house, Modupe was in charge of all arrangements, of course, they felt shut out because they had virtually no role to play and were left with no choice than to fall in line.

Shortly after, the step daughter who Modupe thought she had succeeded in winning over reportedly broke ranks with her over a phone conversation she overheard. There was also an incident of a missing suitcase where all the gifts and cash presented to the celebrant was, had disappeared from the Hilton, venue of the birthday party.

A few phone calls later, it was discovered that one of Modupe’s guests who had been given a ride on the private jet of Premier Lotto Chairman and Odole of Ife, Sir Kesington Adebutu had checked in the said luggage. An enraged George reportedly told Sir Kesington to kindly take the suitcase for safekeeping and later, allegedly tongue-thrashed the wife.

The couple had such a bitter quarrel that week that they were not only on speaking terms but George had gone ahead to give his wife the marching orders. This marked the beginning of the end as things seemed to snowball afterwards. The news from London was cheering for the Oguntade children who had all along been only tolerating their mother-in-law. Now joined by their sibling who had hitherto broken ranks, they decided that Modupe had to leave.

They reportedly accused her of systematically drugging their father with psychotic drugs especially Trazodone, and manipulating him to favour her and her children. They also accused her of selling cars that had been presented to him as gifts without his knowledge.

But somehow, the couple mended fences. In fact, Modupe almost convinced her husband to stay put in London and not return to Nigeria again but he insisted that he had to return home.

Unfortunately, a mild drama ensued in the Oguntade Lekki home as the couple were flying into town. Jimi Aina, the eldest son of Modupe got wind that the step children were plotting to lock his mother out of her home and arranged security protection in form of some soldiers. The fully-armed men were dispatched to Lekki.

Not to be outdone, the children reached out to top persons in the security too, and they were able to get Police officers of their own to also stand guard.

The situation could have degenerated into a show of force and even worse if not for the intervention of Lagos Commissioner of Police, Hakeem Odumosu. He, it was, who was able to speak with Jimi, urged the soldiers to stand down and some form of normalcy eventually returned.

That was not all, news also filtered through that the children were going to storm the airport to stop Modupe from even entering her husband’s car but they were told that such an action will be embarrassing to their father, so they jettisoned the idea.

To calm frayed nerve, it was a close friend of Modupe, Chief (Mrs.) Shade Okoya and her husband, Aare of Lagos, Chief Rasak Okoya who arranged airport security and vehicles to ferry the Oguntade’s home. But the battle line had been drawn.

So it was no surprise that a few days after their arrival, Modupe and her daughter in-law, Deola, who is married to Bolaji Ayorinde, SAN had an altercation. Modupe was angry that the Oguntade children led by Deola had sent the cooks away without her knowledge. They were only brought back that day.

The wife complained that the daughter had hitherto called her a thief who stole plates and a piano from London, and now had the temerity to order her cooks around.
“I am tired. This is too much. This is my house. The atmosphere is too toxic and I would not take it anymore”,

Modupe reportedly yelled. She also noted that the problem in the family had caused her to develop High Blood Pressure.

Her husband explained that he, in fact, sent the cooks away, but she would have none of it because according to her, for years, she had been in charge of her kitchen and domestic affairs, and it was impossible for him to suddenly change overnight. It was a very heated encounter in the presence of Jide, Oguntade’s last son.

In fact, Modupe accused the daughter in-law of being the brain behind the negative social media stories written about her and while also speaking, referred to Jide as her son. But Deola countered that Jide was not, because Modupe had never treated him as one. She reportedly said, “Don’t call him your son, all your three sons have at least one house each where is Jide’s own?”

She also accused her and her sons of orchestrating Jide’s ouster from his job.

Also, Modupe told her step daughter not to come to her house to give any orders, the step daughter fired back that she was in her father’s house and had her rights. While also accusing her step mother of raising her voice against the dad. The back and forth went on for a few minutes and George, who was there all along, was so embarrassed that he left the scene.

On the night of Wednesday, October 14, some prominent Nigerians including Chief Okoya were at the residence allegedly to appeal to George. In the course of the discussion, Modupe was accused of infidelity. She vehemently declared that she was innocent and wrongly accused. She reportedly swore by the Bible and Quran.

Another argument erupted leading to a shouting match between George and his wife. It was so bad that the domestic staff had to call the children. It was in the presence of the children that George said that he was no longer interested and that it was all over between them. He then ordered the wife out of their home.

Modupe was adamant about not leaving, she said she was not going to step an inch out of the house, and almost engaged him in a fight, accusing him of taking the action because of his dalliances. She reportedly told him that she was not going anywhere because she had nowhere to go.

George reportedly replied that he had built three houses for her three sons in Lekki and also built a house for her mother, Mrs Alexandria Motolani Adufe Haastrup (whom we learnt she has a strained relationship with recently); that she was free to move to any of them.

When it was obvious that George was serious about his order for her to leave, Modupe packed over 100 suitcases filled with clothes, watches and jewellery and left.

For now, the children seem to have won the battle of taking control of George’s life and properties and now take turn to spend the night at their father’s house.

Though no one knows where Modupe is living at the moment, there are indications that close family friends like Chief Rasak Akanni Okoya and the Oba of Lagos have waded into the matter with a view of settling the brouhaha and bringing the erstwhile lovebirds back together again.