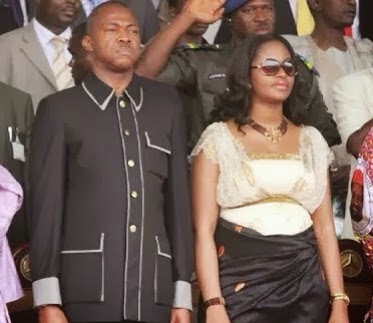 Estranged wife of former Enugu State Governor, Sullivan Chime, Clara Chime has asked the FCT High Court, Apo, to grant her custody of her 10-year-old son. Clara said this in her response at the hearing of the petition filed by Sullivan, seeking the dissolution of their 11 years marriage. She noted that she is ready for the divorce and prayed that the custody of their son be given to her and child maintenance fee of N500,000 monthly.

Clara told the court that her son was not properly cared for and she is only allowed to see him five hours a month under heavy security. Clara also informed the court that she was depressed during her marriage because her husband only had marital relations with her only on their wedding night and never touched her so it led to her depressed condition. .

She further denied any allegation of schizophrenia but said she only saw the CMD of neural psychiatric because her husband brought him home. The case was adjourned till June 10 for continuation of hearing.

Back when her husband was still the governor, Clara was treated in the most inhumane way possible. Her marriage broke down irretrievably but she continued to stay in the government house hoping that her husband would change his ways. Things were also made worse by family members who wanted her to remain in the loveless marriage because of what they were benefitting from the then governor.