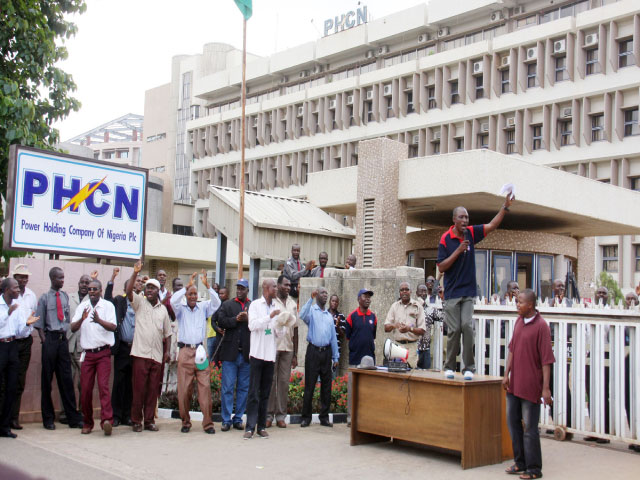 The National Union of Electricity Employees has suspended its nationwide strike. Eko Electricity Distribution Company made this known via its Twitter

Buhari disbands Osinbajo’s economic team, appoints Soludo, Rewane
“Okonjo-Iweala helped get Nigeria out of debt, but we are back there,” says former minister, Amina Mohammed (video)
N50 POS charge to be paid by businesses not customers – CBN clarifies

The National Union of Electricity Employees has suspended its nationwide strike. Eko Electricity Distribution Company made this known via its Twitter handle @EKEDP on Thursday.

The electricity workers had, on Wednesday, shut down the headquarters of Ikeja Electric and Eko Electricity Distribution Company in Ikeja and Marina, Lagos. Not only did this affect the national electricity grid which broke down, blackout was experienced across the country for three straight days.

The Ibadan Electricity Distribution Company (IBEDC), the country’s largest power distributor, later issued a statement to announce that the strike had disrupted its services.
“Subsequently, the action has led to a nationwide shut down of electricity installations and has resulted in the disruption of service across our network. We sincerely apologise for all inconveniences to our esteemed customers. Power will be restored immediately the strike is called off,” the company said.

Abdulazeez Abdullahi, head of corporate communication at Kaduna DisCo, confirmed the system collapse in a statement.
“We regret to inform you that the prolonged power outage being currently experienced in Kaduna, Sokoto, Zamfara and Kebbi states is as a result of the collapse of the national grid earlier this afternoon,” Abdullahi said.

“The grid collapse was occasioned by the nationwide industrial action by members of the Nigerian Union of Electricity Employees who are still in negotiation with the federal government to resolve all issues in dispute. We sincerely apologise for any inconvenience caused and promise to restore power supply as soon as the national grid is back in circuit.”

The national electricity grid has recorded more than 10 collapses in 2019, worsening power supply across the country.

President of the NUEE, Joe Ajaero, had, in a statement, accused the Bureau of Public Enterprise of failing to address and pay up over 2,000 disengaged workers of the Power Holding Company of Nigeria since 2013.

He alleged underpayment of severance of over 50,000 ex-PHCN staff and illegal transfer of schools built by the union to investors. He also accused GENCOs of refusing to sign Condition of Service and rules of engagement, adding that some DISCOs were also denying the retirement benefits of some electricity workers.