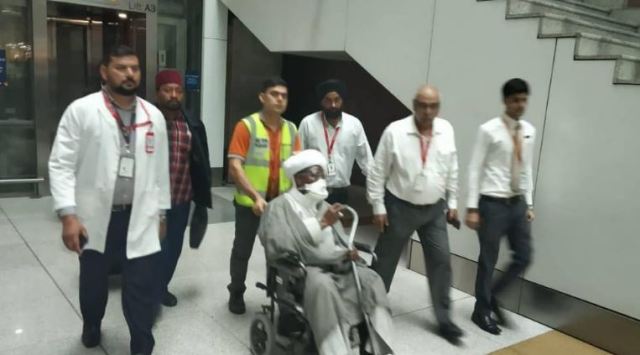 After spending over three years in custody, the leader of the Islamic Movement in Nigeria, Sheikh Ibrahim El-Zakzaky and his wife, Zeenat, on Monday e

After spending over three years in custody, the leader of the Islamic Movement in Nigeria, Sheikh Ibrahim El-Zakzaky and his wife, Zeenat, on Monday evening departed the Nnamdi Azikiwe International Airport, Abuja, and arrived India for medical treatment.

El-Zakzaky, and his wife, had last week turned down the Federal Government’s offer of a private jet for their Indian medical trip which they embarked upon on Monday. One of the sources said, “They told the government officials that they requested the court to permit them to travel to India to treat themselves at their personal cost, which they said included the cost of the flight. The couple, in turning down the offer, said it would be a departure from the court’s ruling if they accepted to travel on a government’s sponsored trip.”

Kaduna High Court had, last week, ruled that the IMN leader and his wife be allowed to seek medical treatment in India. The trip came a day after about 186 doctors from Pakistan, India, Iran, Afghanistan, Syria, Lebanon and Iraq wrote a letter to President Muhammadu Buhari pointing on Sheikh El-Zakzaky’s physical conditions, asking the Federal Government to transfer him to a well-equipped hospital as soon as possible.

Though they arrived the Nnamdi Azikiwe International Airport, Abuja, in the morning, they were eventually flown out of the country in a chartered jet said to have been provided by the Iranian government at about 6pm. The compliance with the court order allowing the Muslim cleric to travel to India for medical attention was in total disregard to the extra-judiciary conditions set by Kaduna State government after the court order.