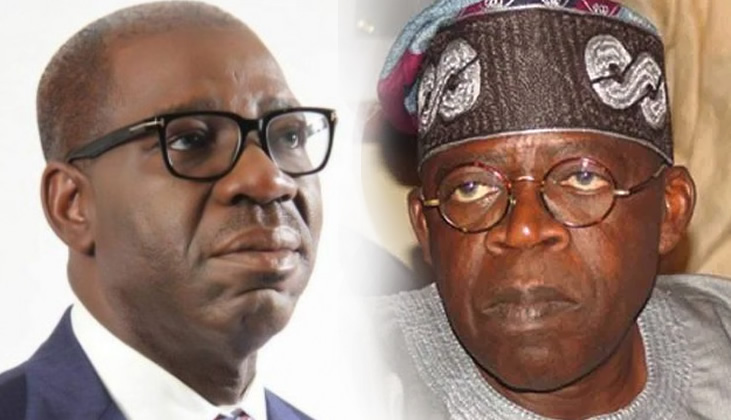 Governor Godwin Obaseki of Edo State has lashed back at the chieftain of the All Progressives Congress (APC), Asiwaju Bola Tinubu, telling him that he

Governor Godwin Obaseki of Edo State has lashed back at the chieftain of the All Progressives Congress (APC), Asiwaju Bola Tinubu, telling him that he cannot extend his political empire to Edo. The governor in a statement by his Special Adviser on Media and Communications Strategy, Mr. Crusoe Osagie, said Edo people are determined to end the godfatherism in the state.

“Our attention has been drawn to a television broadcast in which a former Lagos State Governor and chieftain of the All Progressives Congress (APC), Asiwaju Bola Ahmed Tinubu, in his quest to extend his political dominance and empire to Edo State, decided to take over the role of Edo people to choose through the ballot who to govern them for the next four years.

“It has become obvious that the spirited fight which Edo people have put up against godfatherism has sent tremors beyond the shores of Edo to the likes of Tinubu, who has for years sustained a stranglehold on Lagos and other states in South Western Nigeria, hence this desperate, last ditch effort to rescue the unproductive political instrument, now popularly referred to as godfatherism, with which he has feathered his nest and built his political empire at the expense of the people.

“Tinubu knows clearly that come September 19, when godfatherism would have been dismantled in Edo State, the people of Lagos may just have found the recipe and formula for removing the chokehold placed on their collective destinies for decades by Tinubu, hence the inciting television broadcast.

“He should take note that Edo people do not yield their will, liberty and power of choice to oppressive figures because they are perceived to have economic and political means. Like one of the great sons of Edo, former Governor and former National Chairman of the APC, Chief John Odigie-Oyegun, recently said, our people do not give in to ‘primitive loyalties.’ We always chase noble causes and a little study of our history, should show Tinubu the indomitable spirit of the Edo person.”

“We call on all Edo people, friends of Nigeria and all lovers of democracy to disregard all the comments by Tinubu, as the allegations about the Edo State House of Assembly and other claims in the broadcast are completely false. We urge the irrepressible people of Edo State to disregard the threats and come out en-masse on September 19 to vote for Governor Godwin Obaseki and the Peoples Democratic Party (PDP), as their voice and vote are supreme in the governorship contest,” the statement said.

Obaseki maintained that “the outcome of next Saturday’s election would reinforce the reigning saying in Edo’s public sphere, ‘Edo No be Lagos,’ and provide for the people of Lagos a template to dislodge godfatherism as well as set the stage for the realization of the full potentials of Lagos, which Lagosians have been denied of for decades.”