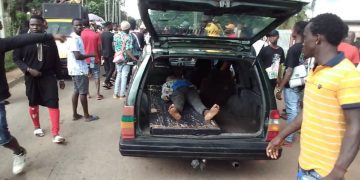 The Edo State Government on Friday charged all security agencies in the state to fish out the killers of #EndSARS protesters within 24 hours.

The Edo State Government on Friday charged all security agencies in the state to fish out the killers of #EndSARS protesters within 24 hours. The Deputy Governor, Philip Shaibu, gave the order while addressing protesters after the sad occurrence, saying the government will not fold its arms and watch harm come the way of young people exercising their rights as citizens of the country.

However, in a statement by the Special Adviser to Governor Godwin Obaseki on Media and Communication Strategy, Crusoe Osagie, on Friday, the deputy governor said only one protester was killed, vowing that perpetrators of the act would be brought to book.

Continuing, he said, “We will not fold our hands as a government and watch miscreants brutalize anyone involved in this protest. So, please maintain your calm and orderliness during the protests. We are with you in this struggle. President Muhammadu Buhari has also said that there is going to be a reform, but we, as a state, are going to ensure that we have a reform that is people-friendly because the police are meant to protect lives and property not to destroy them. I want to assure you that we are with you on this.”

For over a week, youths across the state who joined their counterparts from different parts of the country, have been demanding a total overhaul of the Nigeria Police Force and an end to extrajudicial killings by men of the defunct Special Anti-Robbery Squad. The protests have intensified despite the disbandment of the unit and the announcement of the Special Weapons and Tactics to replace it.