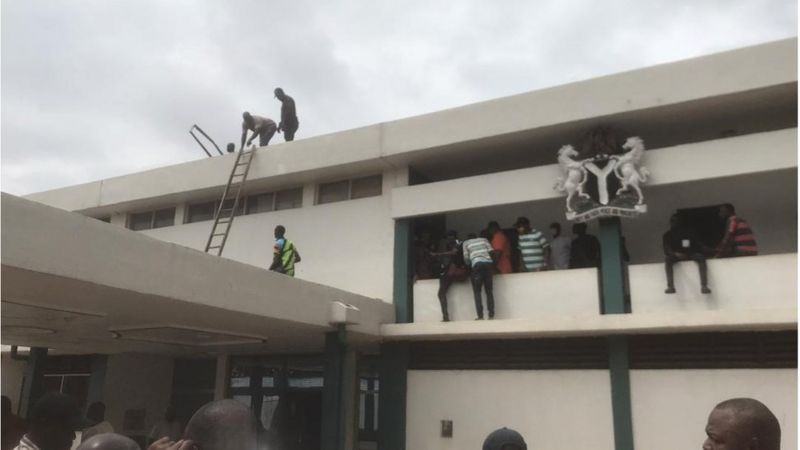 Some men on Thursday vandalised the Edo State House of Assembly and removed its roof. In a viral video, the men were seen removing the legislative mac

Some men on Thursday vandalised the Edo State House of Assembly and removed its roof. In a viral video, the men were seen removing the legislative mace on top of the building. The video also showed trucks offloading gravels at the entrance of the Assembly Complex while the suspected vandals trooped into the building.

Earlier in the day, policemen had surrounded the Assembly complex in Benin City, the state capital. The Police action was in a bid to prevent an attack on the complex. This is coming barely 24 hours after the Deputy Speaker, Yekini Idiaye, was impeached by the state lawmakers while the member representing Orhionmwon-South constituency, Roland Asoro, replaced him immediately.

Following Idiaye’s impeachment on Wednesday, Speaker of the House, Frank Okiye, said Idiaye was impeached because he allegedly planned with the leaders of the All Progressives Congress and the Imo State Governor, Hope Uzodinma, “to illegally and violently take over” the Assembly. Idiaye and some lawmakers had on Monday pledged their support for the APC governorship candidate, Osagie Ize-Iyamu.

The Speaker, in an address aired via social media shortly after the impeachment of Idiaye, called on the President, Major General Muhammadu Buhari (retd.), to call members of his party to order.

With about six weeks to the September 19 governorship election in Edo, the political atmosphere gets turbo-charged day after day. Governor Godwin Obaseki, who is seeking reelection on the platform of the Peoples Democratic Party, will face Ize-Iyamu of the APC, and other political contenders.