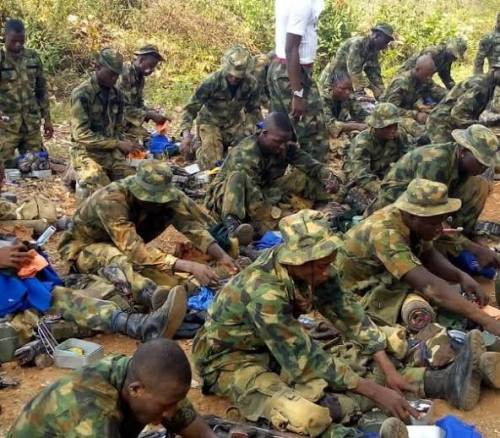 The Economic Community of West Africa States, ECOWAS, Court in Abuja, has ordered the Nigerian government to immediately pay the arrears of salaries a

Army foils Boko Haram bid to attack Lagos, arrests eight
Few coronavirus cases in Africa because of our prayers, fasting – Bamiloye
How Atiku saved Obasanjo from near bankruptcy after he came out of prison

The Economic Community of West Africa States, ECOWAS, Court in Abuja, has ordered the Nigerian government to immediately pay the arrears of salaries and other entitlements to 244 soldiers dismissed from the Nigerian Army in 2016.

The Army dismissed the soldiers after they were accused of abandoning the Boko Haram insurgency fight and fleeing over alleged inadequate provision of arms and ammunition. The soldiers took the matter before the ECOWAS court to demand the enforcement of their fundamental human rights, including the right to their salaries and entitlements.

In its judgment delivered on May 15, 2019, the court faulted the decision of the Nigerian Army to dismiss the soldiers. In a supplementary judgement on Thursday, the court ordered the Nigerian government to pay all arrears of monthly allowances and salaries and other entitlements of the affected solders up to January 2016.

Justice Keikura Bangura who delivered the judgement through his rapporteur, said the decision was arrived at after the hearing of the application by all parties.

Although the Court rejected the soldiers request for an order directing the Nigerian government to reinstate them in the Army, the Court upheld their application that their sack violated their human rights, including right to work and fair hearing.

In the supplementary application lodged before the Court on June 14, 2019, the soldiers asked the Court for an order mandating the Nigerian government to immediately reinstate them, including to their respective ranks, having found that their dismissal without arraignment, prosecution and sentence by a duly constituted Court Martial was illegal, null and void.

The soldiers also asked the Court for an order directing the Nigerian Army to pay their monthly salaries and other allowances from the whole of 2015 and such other months until the date the judgement is enforced.