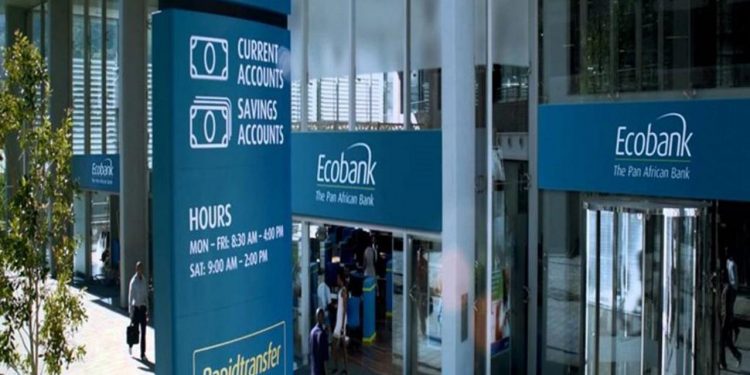 Ecobank disengages over 900 staff in one week

In what many have been as a result of the prevailing harsh operating environment in the country, Ecobank Nigeria has sacked over 900 of its employees

Nigeria is like a stranded truck under Buhari – The Economist
“Okonjo-Iweala helped get Nigeria out of debt, but we are back there,” says former minister, Amina Mohammed (video)
COVID-19: Contributions to relief fund hit N19.4bn

In what many have been as a result of the prevailing harsh operating environment in the country, Ecobank Nigeria has sacked over 900 of its employees across the country, thereby adding to the nation’s already bloated unemployment market.

Some of the affected ex-employees said the bank sacked 800 tellers last Friday while another 100 were thrown out of their jobs on Tuesday. This was even as the bank argued that the sacked workers were not its direct employees.

But the National Union of Banks Insurance and Financial Institutions (NUBIFIE), has accused the bank’s management of being economical with the truth. NUBIFIE President, Comrade Anthony Abakpa said the workers were sacked without following due process.

According to him, some of the workers sacked had been in the Ecobank employment for over ten years and were paid parting peanuts of between N50,000 to N100,000.
“We’ve been having issues with the bank’s management over its flagrant disregard for labour laws in the country, but the recent action of sacking our members without due consultation with the union would be the last straw that broke   the camel’s back and we can no longer continue to be quiet,” he said.

Abakpa said in recent times, over 1000 members have been sacked by Ecobank management without following due process. He listed among other breaches committed by the bank against its members to include, nonpayment of pension up to date, denial of such employees of health facilities, offered through Oceanic Health and payment of N5,000.00 per day for drivers on official assignment out of their station.

The union also accused the bank of victimization of outsourcing of staff, non-provision of protective uniform for the despatch riders while on duty, using of drivers beyond 6pm by the branch marketers without allowances, and the Omniflow unit not paid over -time allowances to date. Also listed among the bank’s misdemeanours include work on weekends with no rest for the staff of Omniflow, series of sickness and death in the Omniflow unit and poor salaries among others.

He said, “The argument of the bank that they are contract staff is not tenable, because in Nigeria, every worker irrespective of his status is protected by law and belongs to a union. We are not saying they cannot sack, but what we want is that the workers must be adequately compensated and this right we are going to enforce on behalf of our members.

Meanwhile, Ecobank Nigeria in its official reaction said it did not disengage its staff, but rather decided not to renew the contract of its third-party recruitment agencies which expired recently and as such returned this category of personnel back to the agencies that engaged them. The bank’s statement read in part “As a demonstration of the bank’s concern and compassion for the affected personnel of our contractors, palliative measures were put in place by the bank to cushion the effect on them.

“These include payment of contract cessation packages of over half a billion Naira already paid through their employers as well as opportunity given to those with requisite qualification to apply to the bank for permanent employment. In addition, the bank has offered them the opportunity to become Xpress point agents of Ecobank as a way of further providing them entrepreneurial and financial empowerment. May we state that Ecobank is not obligated to renew its contract with the service providers involved.”