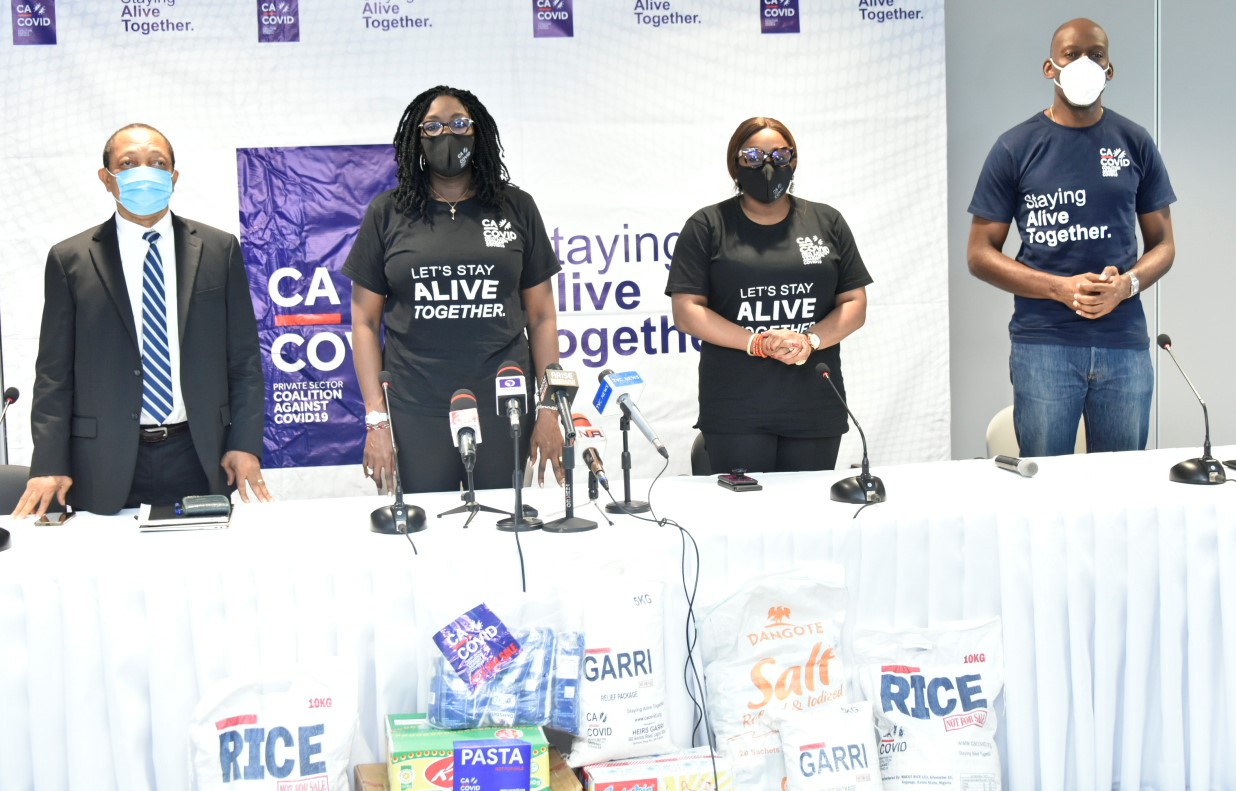 Nigeria’s private sector led Coalition Against COVID-19 (CACOVID) yesterday formally announced the flag-off of a nationwide distribution of multi-billion naira food palliative and other relief items to mitigate the adverse effects of the novel coronavirus pandemic on vulnerable Nigerians.

The palliative for which the private sector operators are spending about N23 billion, will cover 1.7 families amounting to about 10 million people across the 774 local governments in the country, including the Federal Capital Territory.

CACOVID Administrator and CEO of Aliko Dangote Foundation (ADF), Zouera Youssoufou told newsmen in Lagos that the food distribution is the next phase in the line of actions mapped out by the coalition to partner government in the fight against the coronavirus pandemic and relief the vulnerable people of the burden posed by the outbreak of the disease.

Zouera disclosed that with the announcement in Lagos, the Coalition has divided the nation into the six geo-political zones and the distribution was being flagged-off simultaneously in states such as Adamawa, Yobe, Ekiti Ogun, delta, Edo, Kano, Sokoto, Kaduna, Plateau, and Nasarawa.

The offer of food palliatives, it will be recalled is coming on the heels of donations by CACOVID, of medical equipment in some instances to state governments to strengthen their response capacity and outright building of isolation facilities in about 38 centres in the country for which the Coalition had spent about N15 billion to help ease off the pressure on the states and federal government in their responses to the Pandemic.

CACOVID has also helped to reinforce the testing capacity of the NCDC with the donation of over 300,000 test kits and PPEs just as the Coalition is primed to commence the third and final phase of its COVID-19 response plan. Mrs. Youssoufou displaying some of the food items disclosed that each family that would benefit from the palliatives would receive in various quantities, Rice, Pasta, Garri, Maize, Semo, noodles, salt and Sugar.

She explained the rationale behind the involvement of private sector operators in the fight against Covid-19 saying the irreducible minimum the private sector could do as partners in nation building is to collaborate with government at all levels to help fight the pandemic and reduce the hardship it has brought upon the nation and her people.

“CACOVID has since the onset of the coronavirus pandemic been committed to providing relief packages to the most vulnerable. The Coalition’s primary focus was to aid the Federal Government in the fight against COVID-19. Having done this successfully, we are turning our attention to offering a reprieve to households who have been adversely affected by the scourge of the virus.

“Through this Food Relief Programme, we will be reducing the risk of a second viral wave by encouraging people to remain indoors rather than expose themselves when seeking to provide food for themselves and their families, Zouera stated.”

The Aliko Dangote Foundation CEO reiterated that the Coalition will be working closely with the state governments through the Nigerian Governors Forum to ensure all targeted families are reached and that it is done transparently.

She said: “The State Governors and FCT Minister, through the State Implementation Committee, will appoint a coordinator to diligently record and send an accurate and complete copy of the inventory tracker and goods delivery notes to the CACOVID Operations Center daily through the State CACOVID Representative to ensure timely and efficient delivery and proper transparency and accountability.”

According to her; “The Food Relief palliative is being managed by the CACOVID Operations Centre in Lagos and we have procured the various food items from leading Nigerian Fast Moving Consumer Goods (FMCG) companies to achieve the necessary scale, speed, and quality assurance at carefully negotiated prices that reflect value for money without creating negative market distortions. Each pack or box is clearly identified and marked as ‘Not For Sale’.

“CACOVID has laid out an elaborate plan and will be distributing the palliative to the target beneficiaries across all 774 Local Government Areas in Nigeria with the State Governors and the Minister of the Federal Capital Territory (FCT) as champions of this initiative in each state”, Youssoufou added.

She assured that since the resources of CACOVID are the contributions of private sector operators, operations and the account are being audited to ensure transparency and accountability.

Explaining the strategy being adopted for the distribution, Ms Osayi Alile, CEO, AspireCoronation Trust (ACT) Foundation, who is also CACOVID  Operations Implementation Committee member, explained that the Coalition was not political party biased but discharging its mandates to all Nigerians as ;aid out in the CACOVID objectives and goals.

According to her, a state implementation Committee has been constituted in each state which in turn draw up a list of households based on clearly defined criteria used to select the benefitting households that is consistent with the objectives of the CACOVID National Food Relief Programme.

“The State Government, through the State Implementation Committee, will organize for representatives of all the state Local Government Areas (LGAs) to collect the allocations for each LGA and oversee the redistribution to each Ward and onto each eligible beneficiary at the grassroots subsequently based on an agreed distribution schedule”, she explained.

In his remark, the Group Chief Corporate Communication Officer, Mr. Anthony Chiejina stated that while the sharing of the palliative is going on across the nation the Coalition would continue to intensify its grassroots awareness campaign on the virus simultaneously.
“While the people are being fed, we are also telling them that the virus is real and what should be done by way of hygiene to stay safe.”

Another CACOVID leader and  the Group Head, Corporate Communication, Access Bank Plc, Amaechi Okobi pleaded with the media to help inform the people of the food distribution phase of the Coalition action plan saying the people deserve to know is being done to compliment government’s efforts to reduce the effect of the deadly virus. 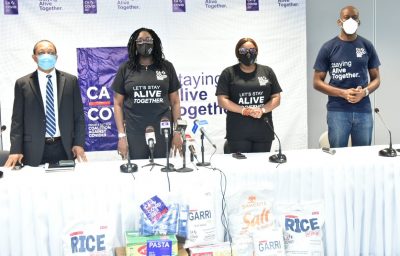