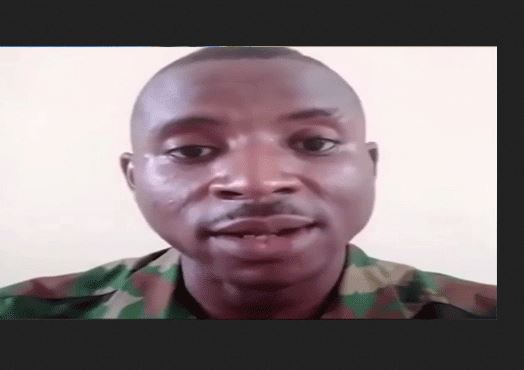 Martins Idakpini, a Lance Corporal who criticized Tukur Buratai, Chief of Army Staff in a viral video has been granted bail by a court martial sitting

Martins Idakpini, a Lance Corporal who criticized Tukur Buratai, Chief of Army Staff in a viral video has been granted bail by a court martial sitting in Sokoto.

His lawyer, Tope Akinyode, Idakpini’s lawyer, said on Thursday that the court martial granted his client bail after he argued for his release while hoping that the army authorities will obey its own judicial process and release Idakpini on bail.

Akinyode said, “Court martial grants bail to Lance Corporal Martins Idakpini. The court sitting in Sokoto made the order today after I argued the bail application. Idakpini was arrested for criticising army authorities. He’s been detained for seven months without access to his family.”

Idakpini was arrested in June 2020 shortly after he made a viral video castigating Burutai for the failings of the Nigerian Army to combat and destroy Boko Haram.

Following his arrest, he was put in detention and he remained incomunicado.

A Federal High Court in Abuja in July ordered the Army to grant him access to his wife, lawyer and relatives.

The court had also prohibited the Army from further violating the soldier’s fundamental human rights in any unlawful manner but the Army authorities disobeyed the order.

At that time,  Akinyode who is also the National President of Revolutionary Lawyers’ Forum, said the army refused to grant him access to his client despite being served copies of the court processes.

Akinyode said, “We wrote the AGF and Chief of Army Staff to notify them of the court order. I also called the AGF on phone and he assured me the court order would be obeyed. But myself and Lance Corporal Martins’ wife visited the army headquarters thrice to see my client, but we were blocked.”

Akinyode, who vowed to resist the move by the army, said refusal of the Nigerian Government to obey court orders ridicules the country in the global community.

The Army has been in the news for the wrong reasons in recent times, owing to the handling of the fight against insurgency.