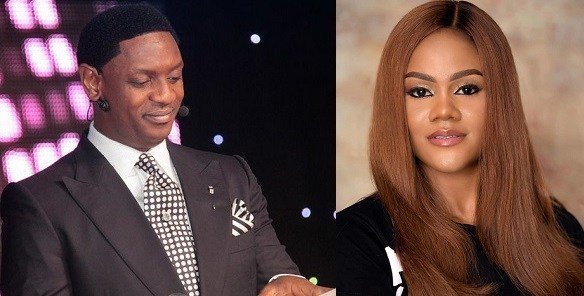 Court documents have revealed the true facts on the judgement delivered in the case between Busola Dakolo, photographer, and Biodun Fatoyinbo, of the

Kingsley Moghalu quits politics, says youths are a big disappointment
VIDEO: The internet never forgets. Back when Nnamdi Kanu was an avid campaigner against those determined to tear Nigeria apart
Mnangagwa’s inauguration halted as Chamisa drags him to court

Court documents have revealed the true facts on the judgement delivered in the case between Busola Dakolo, photographer, and Biodun Fatoyinbo, of the Commonwealth of Zion Assembly (COZA).

Busola, wife to Timi Dakolo, Nigerian gospel singer, has been enmeshed in an intense legal war with Fatoyinbo after she had claimed that the COZA pastor forcefully had carnal knowledge of her on two occasions as a teenager.

In the suit, filed on behalf of Busola by Pelumi Olajengbesi, her lawyer, the photographer had alleged that the action of the pastor, as well as his denial in statements made thereafter, caused her “continuous emotional distress” that affected her marital sex life.

On Thursday, a report had surfaced that the high court in Abuja imposed a fine of N1 million on the photographer. The report, however, turned out to be in error as fresh facts emerged on Saturday that Oathman Musa, the judge, who presided over the case, did not order Busola to pay any fine.

The judge ordered Olajengbesi to pay the sum of N1m personally as a fine and not the photographer.
“It is for all the reasons I advanced herein before, that I declare this action a vehicle of injustice, judicial intimidation and thorough abuse of judicial process carrying in it an overload of dormant claim and injustice, it must and is hereby dismissed. I hereby award the cost of one million naira (N1,000,000) against the claimant’s client personally,” the court document read in part.

The judge added that Dakolo’s lawyer would have been directed to pay “10 times the amount” but “in the interest of women who have cases that are dormant, the court shall always encourage them to come forward.”

In reaction to the verdict, Busola, through her lawyer, vowed to approach a superior court to intervene on the matter.

Here below is a letter written by Busola Dakolo’s lawyers asking Punch Newspaper to retract the false story. 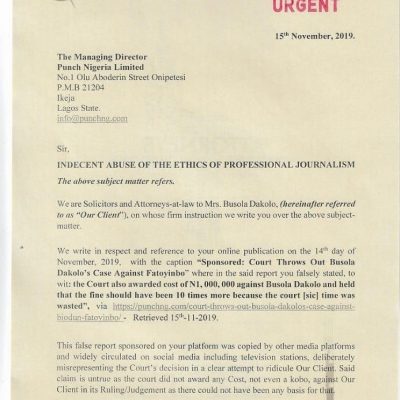 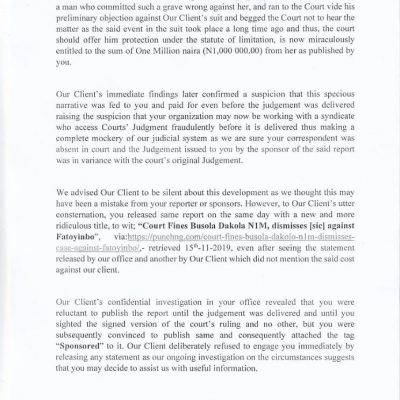 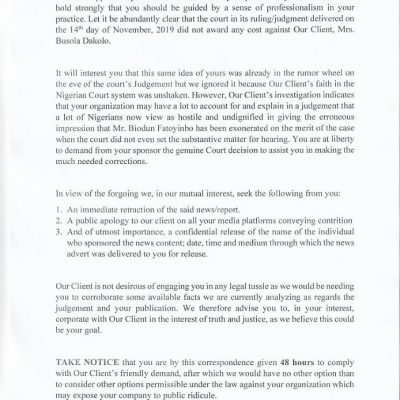