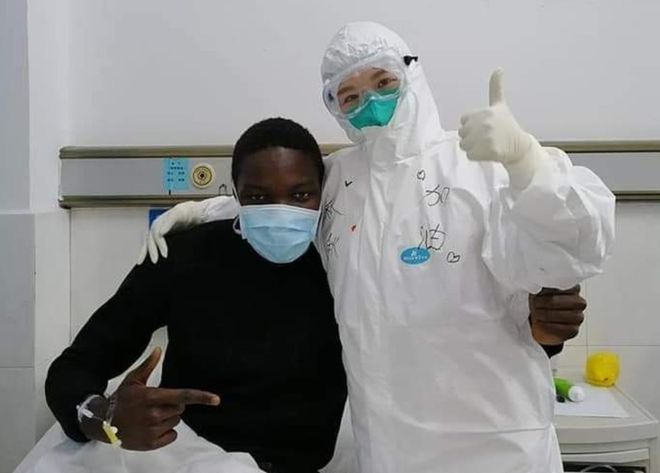 When Kem Senou Pavel Daryl, a 21-year-old student from Cameroon living in the Chinese city of Jingzhou, contracted the coronavirus he had no intention

When Kem Senou Pavel Daryl, a 21-year-old student from Cameroon living in the Chinese city of Jingzhou, contracted the coronavirus he had no intention of leaving China, even if that were possible.
“No matter what happens I don’t want to take the sickness back to Africa, Cameroon specfically,” he said from his university dormitory, where he is now under a 14-day quarantine.

He was suffering from a fever, a dry cough, and flu-like symptoms. When he became ill he thought of his time as a child in Cameroon when he contracted malaria. He feared the worse. “When I was going to the hospital for the first time I was thinking about my death and how I thought it was going to happen,” he said.

For 13 days he remained in isolation in a local Chinese hospital. He was treated with antibiotics and drugs typically used to treat HIV patients. After two weeks of care he began to show signs of recovery. The CT scan showed no trace of the illness. He became the first African person known to be infected with the deadly coronavirus and the first to recover. His medical care was covered by the Chinese state, BBC is reporting

Egypt has become the first country in Africa to confirm a case of the coronavirus. Health professionals warn that countries with weaker health systems may struggle to cope with a potential outbreak of the illness, which has led to more than 1,770 deaths and infected more than 72,000 people, mostly in China.

More than 1,700 medical workers in China have been infected with the virus, and six have died, medical authorities have said. The vast majority of the medical workers, 1,502 out of 1,716, have fallen ill in Hubei province, the epicentre of the outbreak, said Zeng Yixin, Deputy Director of the National Health Commission. It is the first time China is releasing an official count of infections among medical personnel during the virus outbreak which has since been named Covid-19.

Since late January governments around the world, led by the US, began evacuating their citizens out of Wuhan and neighbouring cities. But thousands of African students, workers and families, remain in lockdown across the central Hubei province – the outbreak began in the provincial capital Wuhan – and some think their governments should do more to help them.

“We are sons and daughters of Africa but Africa is not willing to come to our rescue when we need it the most,” says Tisiliyani Salima, a medical student at Tongji Medical University and president of the Zambian Wuhan student association.