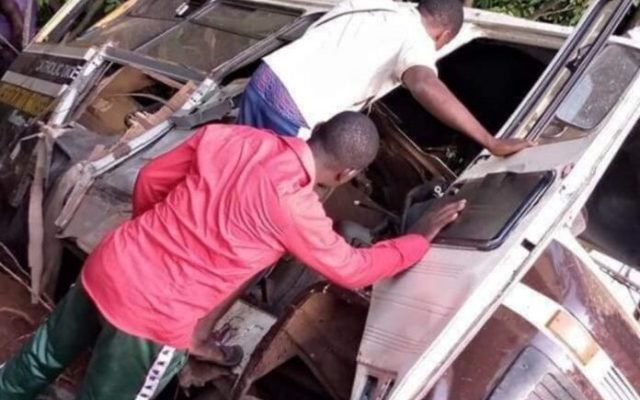 The Federal Road Safety Corps (FRSC), on Thursday, said no fewer than 21 persons lost their lives in an auto crash that occurred on the old Enugu-Okig

Ogbonnaya Kalu, FRSC sector commander in Enugu state, confirmed the accident and the number of deaths in an interview. Kalu said the FRSC unit in Awgu had been to the scene of the accident and hospitals where the victims were receiving medical attention.

According to him, the fully-loaded school bus had 64 occupants, which included 61 students/pupils, two teachers and the driver.
“The low-bed trailer, which eyewitnesses alleged suffered a brake failure, rammed into the school bus first and into a welder’s shop, where the welder and his apprentice were working,’’ he said

An eyewitness, who spoke on the condition of anonymity, said the low-bed vehicle lost control and rammed into the school bus conveying students and pupils. He said the accident threw a lot of families within the Agwu axis of the state into mourning, as one family reportedly lost three children.

“The driver of the heavy duty vehicle ran away from the scene of the accident after forcing the vehicle to a halt inside the bush,” the eyewitness said.

Loading...
Newer Post
Most Nigerian youths are high on drugs – Lagos lawmaker, Alli-Macaulay
Older Post
Here is why the US is opposing Okonjo-Iweala’s election as WTO DG