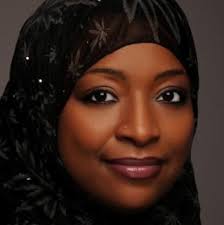 Hannatu Musa Musawa one of those nominated by President Muhammadu Buhari for the position of a PenCom commissioner, lacks the mandatory National

Hannatu Musa Musawa one of those nominated by President Muhammadu Buhari for the position of a PenCom commissioner, lacks the mandatory National Youth Service Corps, NYSC, for graduates.

A political activist in the mold of her father who was a juggernaut of the defunct Peoples Redemption Party led by the late Aminu Kano, and boasts connections in high places.  Thus, it was not surprising that she was nominated by President Muhammadu Buhari to the board of the National Pension Commission (PenCom)  as a commissioner to represent North West.

But unlike her father whose patriotic zeal for Nigeria could not be faulted, Hanney, as she is fondly called, has question marks hanging on her integrity and patriotism. Almost as soon as her name was mentioned as one of the six nominees to the board of PenCom last month, it turned out she did not do the mandatory NYSC after she left school in the United Kingdom.

She studied law at the University of Buckingham, UK, took a Postgraduate Masters Degree in the Legal Aspects of Marine Affairs and has obtained a Postgraduate Masters Degree in Oil and Gas Law from the University of Aberdeen, Scotland. But there’s no record that she did the NYSC. Unofficial checks at the NYSC Secretariat also showed that she may never have served her country.

“If she presented an NYSC certificate, it must be fake because we could not find Musawa record,” an official of the NYSC said.

A group from the North West zone, ‘League of Concern Indigenes’ which felt scandalized by her appointment has written a petition to the Senate to stop her confirmation on the ground that she does not possess the NYSC Certificate. The petition was addressed to Senator Ibrahim Shekarau, Chairman of the Senate Committee that oversights PenCom.

The petition dated 7th October, was signed by Comrade Musa Argungu who resides in Birnin Kebbi. Part of the petition, read: “The group pleaded with the Senate Committee to “investigate this matter very well and save us from the shame of confirming Hannatu Musawa only to be disgraced later by resigning forcefully.”

This may perhaps explain why she had never taken a federal government job since she came back into the country some years ago.

This also explains why she had been active politically on human rights and women rights issues. She even took a shot at elective political office in 2011 when she contested for the Federal House of Representatives legislative seat in her home state of Katsina.