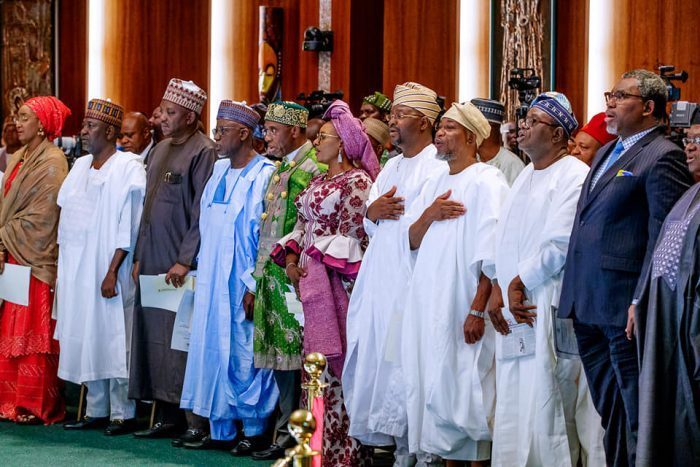 The Peoples Democratic Party on Wednesday described the inauguration of 43 ministers by President Muhammadu Buhari as a poor parade of recycled foot-travelers. The PDP National Publicity Secretary, Mr. Kola Ologbondiyan, in a statement also alleged that many of the ministers had failed Nigerians in governance assignment in the past.

According to him, in assembling a team of ministers made up of persons indicted for corruption and treasury looting, Buhari demonstrated that he has nothing to offer to the nation other than condoning and encouraging corruption, as well as perpetuating incompetence, failure and ineffectiveness in governance.

He said, “The PDP is, however, not surprised that the President had no clear-cut blueprint to rescue the nation from the economic, security and social quagmires which his administration had plunged our nation into in the last four years. Of course, Mr. President has, several times, demonstrated a lack of required capacity to lead a nation as complex as Nigeria, especially at these trying times.

“At a ceremony where Nigerians had expected the forceful articulation of a progressive policy thrust, Mr. President bored the nation with an empty and directionless script that only evoked more despondency in our nation. Instead of helping President Buhari to offer hope, his handlers were more interested on photo-ups and refreshments, away from serious business of governance.”

Ologbondiyan said the PDP feels the pains and anguish of Nigerians, who, by now, would have been enjoying the benefits of the much-desired economic recovery blueprint articulated by the PDP presidential candidate, Atiku Abubakar. He stated that Nigerians could recall that in Atiku’s blueprint, proactive strategic policies and plans were laid out for rapid interventions in critical sectors of the national lives to address the security, economic and social problems caused by the Buhari administration; and return the nation to its pride of place.

He said, “Nigerians should not lose hope but continue in the expressed determination to retrieve Atiku’s stolen presidential mandate in court.”

Here below are the newly appointed ministers and their assigned portfolios: