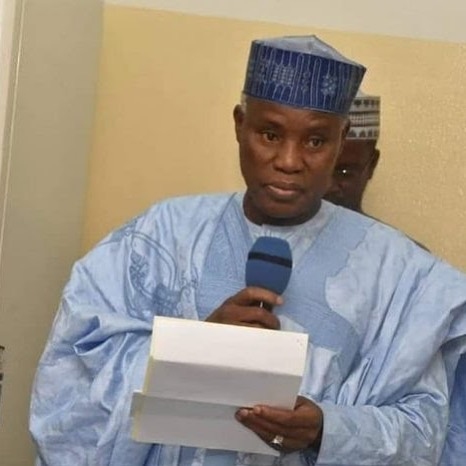 President Muhammadu Buhari has failed to act in the alleged indictment of his Minister of Defence, Bashir Magashi, for a $550,000 security fund divers

Against a groundswell of allegations of cherry-picking on whom to prosecute in his anti-corruption offensive, Buhari is now directly fingered for shielding Magashi, who is accused of stealing and shipping $550,000 from the nation’s treasury to an offshore account. Magashi has been called out to explain his role in the slush amount he received from the infamous ‘Abacha loot’ estimated by Transparency International to be at least $5 billion, out of which $3 billion has been recovered.

Nigerians are incensed that Buhari still ignores the findings in the report. The president’s indisposition to bringing his key appointees to account came to the fore as Shehu maintained that it was not within his purview to respond to everything.

An online media provided more insight to corruption in the Buhari administration as it spotted what appears to be at odds with the administration’s sworn mandate to tackle corruption. It noted that it has been 123 days since Magashi was exposed as having been indicted for stealing and shipping abroad about $550,000 from the nation’s treasury. Yet, Buhari has failed to take action on the indictment.

The medim had on August 28 exclusively reported how Magashi, a retired major general, while in service, got a slice of the infamous ‘Abacha Loot.’ The Buhari government has since benefitted from several millions of dollars in returned funds from countries where the money was hidden. At the time, a presidency official, who asked not to be named because he had no permission to grant media interviews, said: “I can tell you that there is no way the president would have ignored that kind of matter to appoint him if he were made aware.”

But months after, many Nigerians feel embarrassed that the president still ignores the findings in the report. Even when the newspaper contacted Garba Shehu before it went public with the report, he did not answer or return multiple calls and text messages sent over two days on why the president had not taken a stance on the allegations.

The silence of Buhari and his inner cabinet is already being interpreted as consistent with the administration’s policy of selective justice. Even critical government agencies which provide background information like the Department of State Services (DSS) have been fingered for turning a blind eye to Magashi’s alleged corrupt past before the Senate confirmed him.

While the presidency is taking a bashing for its allegedly choosy anti-corruption battle, the Civil Liberties Organisation (CLO) described Buhari as a leader who fights corruption with two different boxing gloves.
“It’s not enough to yell at public gatherings that the government is fighting corruption. Let Buhari arrest and prosecute his appointees indicted for stealing public funds,” a member of CLO said.