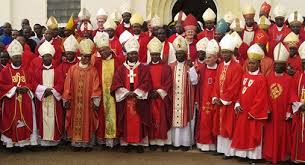 Buhari not ready to deal with terrorists – Catholic Bishops

The Catholic Bishops Conference of Nigeria, CBCN, yesterday, bemoaned the non-challant disposition of President Muhammadu Buhari to arrest and prosecu

The Catholic bishops said the boldness of the terrorists, who make public shows of their crimes, mostly against Christians on social media was condemnable and demanded that the President prosecute the culprits to serve as a deterrent to others.

While giving the message signed by the President of CBCN, Archbishop Augustine Obiora Akabueze, and the Secretary, Calistus Omeogo, during the Ash Wednesday holy mass at the St. Theresa’s Cathedral, Nsukka, the Bishop of Nsukka Catholic Diocese, Most Rev. Prof. Godfrey Igwuebuike Onah, said the inability of the President to bring the terrorists to justice raised questions about his willingness to safeguard lives and property of ordinary Nigerians.

The Catholic bishop said many communities were constantly threatened, harassed and even sacked by herdsmen as they seek to take over more territories to graze their cattle forcibly. The bishop, while reacting to the message signed by CBCN charged all arms of the governments to take the issue of security seriously, adding that there would be no development in the atmosphere of chaos and lawlessness.

The cleric said the President should as a matter of urgency, put a stop to the unprecedented wave of violence and brutality aimed particularly at Christians. He added that the activities of the insurgents have sown dangerous seeds of hatred among different segments of Nigerian society.

The bishop said: “As a mark of mourning for our brothers and sisters who are victims of the violence against Christians, we are all dressed in black and offer our prayers and penance for their repose.”