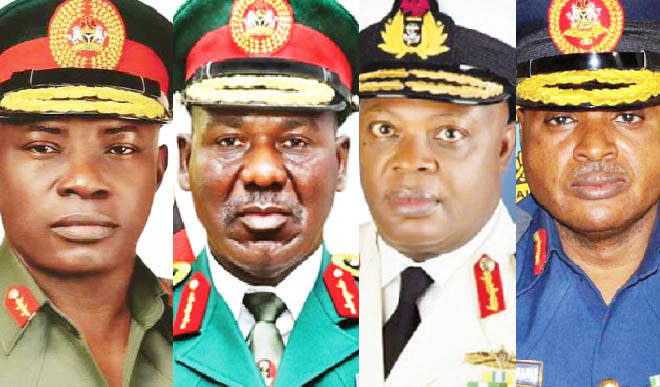 President Muhammadu Buhari has finally heeded the call of Nigerians with the sack of the nation's service chiefs. The new service chiefs are Major-

President Muhammadu Buhari has finally heeded the call of Nigerians with the sack of the nation’s service chiefs.

In a statement by his Special Adviser on Media and Publicity, Femi Adesina, Buhari congratulated the outgoing Service Chiefs on efforts to bring enduring peace to the country.

There has been a clamour for President Buhari to let go of his service chiefs and appoint new service chiefs who will bring in fresh ideas and tactics on ways to tackle the growing insecurity in the country.

Unfortunately, the service chiefs have all under performed in their duties as can be seen with the high incidence of banditry, terrorism and general insecurity in the country.

Besides, they were all over due for retirement having spent more than 35 years in military service. But the president continued to hold them back, by first extending their services in 2015 by two years and renewing their services again in 2017, which is contrary to the rules of public service which stipulates that the compulsory retirement age for all grades in the service shall be 60 years or 35 years of pensionable service, whichever is earlier.

Their continued stay has caused a lot of disaffection, distrust, disloyalty among the rank and file of the military.