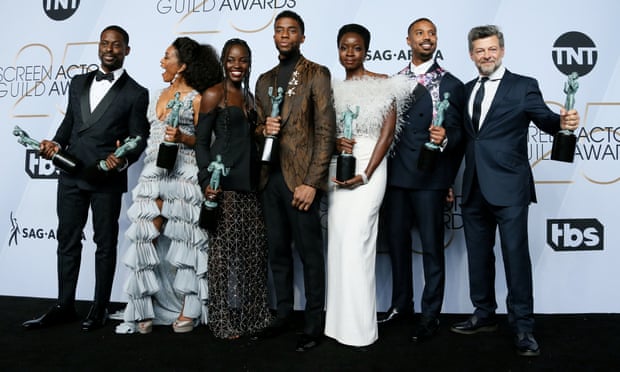 'Black Panther' has won the top film award in at the 25th Screen Actors Guild Awards in Los Angeles on Sunday, putting it in strong contention for an

‘Black Panther’ has won the top film award in at the 25th Screen Actors Guild Awards in Los Angeles on Sunday, putting it in strong contention for an Oscars win next month. The awards ceremony was hosted by Megan Mullally. ‘Black Panther’ beat ‘A Star is Born’, ‘Bohemian Rhapsody’, ‘Crazy Rich Asians’ and ‘BlacKkKlansman’ to receive the award for outstanding performance by a cast in a motion picture. The movie also took the award for best stunt ensemble.

Despite four nominations, ‘A Star Is Born’, the latest iteration of the classic Tinseltown story of an aging star and the ingenue he discovers, went home empty-handed.

This year, the SAG Awards come at a key point in the race to next month’s Academy Awards, just after the Oscars nominations, and well before voting for the winners begins. The Screen Actors Guild accounts for a major percentage of the 8,000-odd Oscar voters, so the SAG winners will earn a lot of awards season momentum. While SAG-winning casts have only gone on to win a best picture Oscar about half the time, the awards are better at predicting best actor winners (79 percent) and best actress (75 percent).