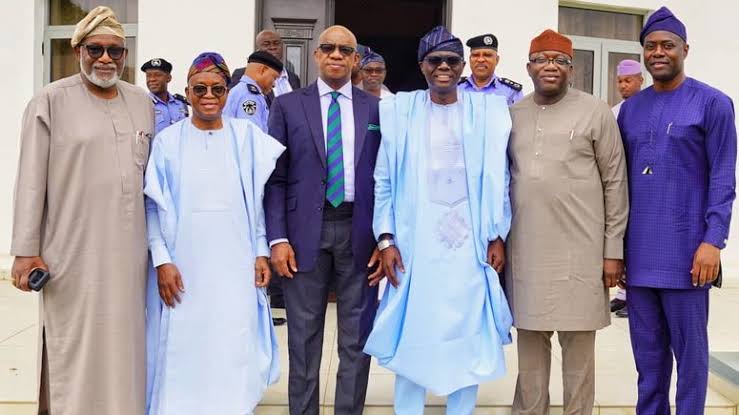 Governors of south-west states have described the vandalisation of assets in Lagos State as a “coordinated attempt” to weaken economy of the region.

Governors of south-west states have described the vandalisation of assets in Lagos State as a “coordinated attempt” to weaken economy of the region.

Rotimi Akeredolu, governor of Ondo who spoke on behalf of the governors, stated this after an assessment tour of Lagos state on Sunday.

According to a statement by Gboyega Akosile, spokesman to the Lagos governor, Akeredolu likened Lagos to a war zone, stating that the extent of destruction was shocking. The governors condemned the widespread violence, adding that there appeared to be an agenda beyond the nationwide #EndSARS protests against police brutality.

“We are deeply concerned with the ease with which public buildings, utilities, police stations and investment of our people have been burnt despite the proximity of security agencies in those areas. The development leaves us with no other option than to believe that there may be other reasons for continued protests, well coordinated and funded,” Akeredolu was quoted as saying.

“We are particularly worried that 48 hours after the unfortunate incident at the Lekki Toll Gate by persons adorning military outfit, there has been no definitive statement from the military authorities on the incident. Our anxiety becomes heightened by the categorical denial of the Governor of Lagos State concerning the military deployment. No Governor has powers to authorise deployment of military personnel in Nigeria.”