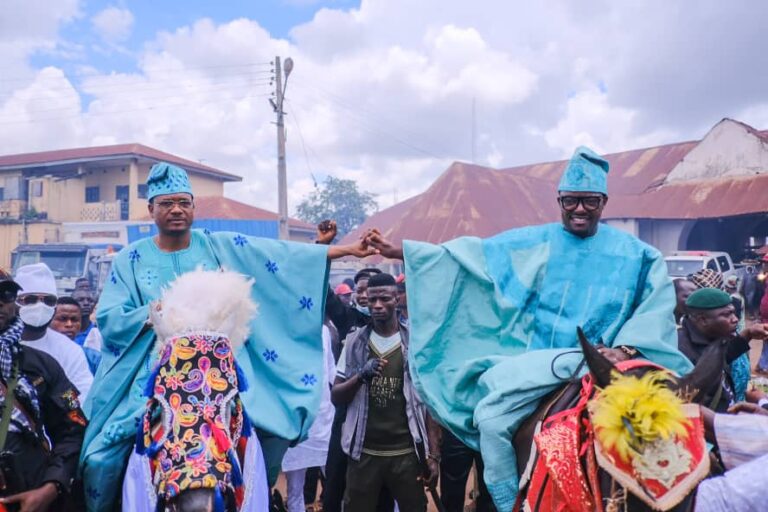 Oba Lamidi Adeyemi, Alaafin of Oyo, has conferred the chieftaincy title of Ayedero of Yorubaland on Shina Peller, a member of the house of represent

Tinubu’s loyalists storm Alaafin’s palace ahead of 2023
Ex Queen Ola reveals she left the Alaafin before rumours of affair with KWAM 1
Estranged wife of Alaafin, Anu, cries out over threats to life

Oba Lamidi Adeyemi, Alaafin of Oyo, has conferred the chieftaincy title of Ayedero of Yorubaland on Shina Peller, a member of the house of representatives.

The event took place on Saturday at the Alaafin’s palace in Oyo town.

Adeyemi said the lawmaker, who represents Iseyin/Itesiwaju/Iwajowa/Kajola federal constituency, has proven himself to be worthy of the title through his “relentless efforts in service of the people”.

The monarch also spoke on the need for youth empowerment and inclusion in decision-making processes at all levels of power, including the traditional institution.

Jide Agunbiade, a businessman and director for US-based National Oilwell Varco (NOV), was also conferred the title of Atobaase of Yorubaland.

“During my 50th coronation anniversary as Alaafin of Oyo, one of the key things emphasised was youth empowerment. We need to include young adults in all aspects of decision-making process, honour their voice and understand and implement their honest opinion and ideas, especially those ideas that foster national unity and bring development,” Adeyemi said.

“We must be willing to share power and privileges to make our country great for both adults and youths. If you noticed, most of the chieftaincy conferment I made recently were for high-achieving young men, most of them under 50 years.

“I took the decision to confer historical titles on these two prominent Oyo and proud Yoruba sons of mine because of their contribution to society and outstanding representation in their various industries and fields of endeavours.

“I consulted the Oyomesi, the traditional cabinet of the Alaafin, who are the kingmakers and they rigorously ascertained the character, business acumen, philanthropy, and public dispositions of both Agunbiade as Atobaase, and Peller as Ayedero of Yorubaland, and we found them worthy as thoroughbred Yoruba men who are culturally inclined and traditionally oriented personalities that can wear the toga of Yoruba royalty and to be promoters of the institution of chieftaincy.

“As with Shina Peller, what can I say? His father and I come a very long way and I have known him all of his life. His relentless passion to help others, strive for peace and harmony, rare business acumen and intellect made me to be one of the people to advise him to go into politics. It is unbelievable the work he has done in the last two years to foster development, peace, harmony and prosperity.”