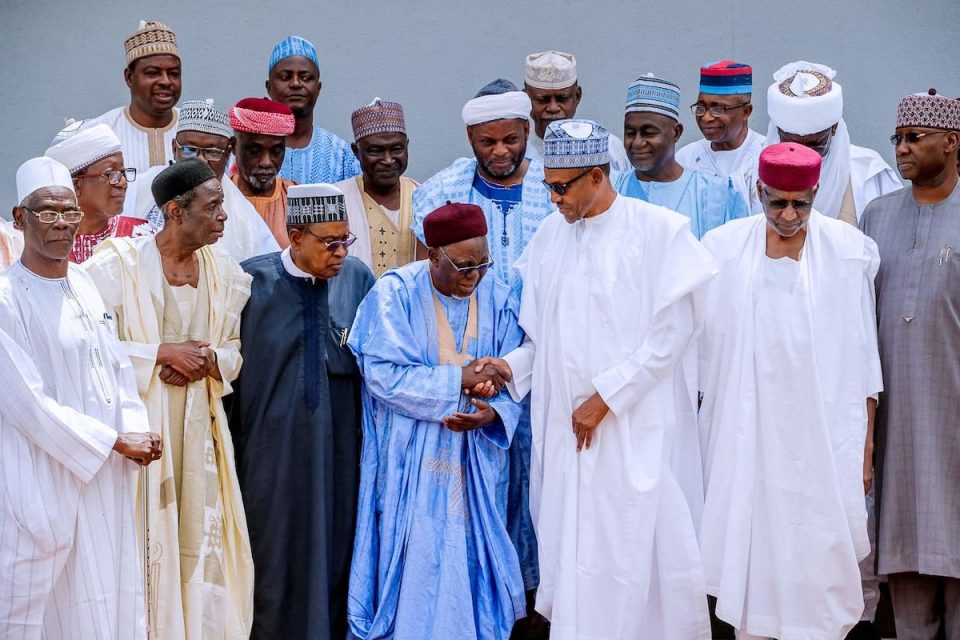 Northern leaders under the umbrella of the Arewa Consultative Forum (ACF) have asked President Muhammadu Buhari not to be discouraged by recent calls by some Nigerians to resign while also urging him to fire his military chiefs, Leadership reports. They admonished him to remain focused on their war against insurgency and other forms of criminality across the country.

The group said that public discourse on the state of security in the country, which led to the call that the president should resign or sack the service chiefs was uncalled for and unpatriotic. ACF further urged Nigerians not to misinterpret Buhari’s comment that he was surprised that some communities were attacked in Niger State by bandits.

The secretary-general of the ACF, Anthony Sani, said that it was very true that Buhari promised Nigerians that if voted into power, he would tame insecurity posed by insurgents and other criminal elements in the country. Sani said: “The All Progressives Congress (APC) also campaigned that it would tame the unbridled corruption which is the bane of socioeconomic development, as well as saying the government would diversify the economy from dependence on oil wealth that is never the result of hard work.”

“Nigerians voted the APC and Buhari into government in the hope that the promises could find expression for common good. But because of frustrations with the immediate past regime, most Nigerians did not consider the reality that in politics, there are some promises that are too good to be true because either the predisposing factors were ill considered, or the promises were truly unrealistic.

“What is more, the possibility of freak and vicissitude of life was not taken into account. Hence, the over expectations that Buhari would reverse insecurity to permanent security within the first six months,” he said, adding that since coming into office, President Buhari had told Nigerians that what he saw was over and above his estimation.

“The president was honest enough to admit that he considered the possibility of abdication but for instinct of patriotic courage. Since then, the government has confronted the challenges, and there have been some appreciable progress. The activities of Boko Haram have been consigned to fringes of the Northeast zone as against in the past when the attacks were ubiquitous across the North and fears almost overwhelmed northerners.

“It is the progress which retuned relatively normal life in most parts of the North that earned the government re-election in 2019. And as soon as the government was inaugurated for the second term, there was an upsurge of insecurity posed by kidnappers, armed robbery, banditry, cattle rustling, clashes between herders and farmers, cultism and ritual killings,” Sani said, as he called on Nigerians to unite against insecurity.

The ACF scribe said that “instead of coming together to unleash their synergistic potential against the collective challenges, some elbow-throwing grievance groups clamouring for government preferment gave the challenges ethnic and religious profiling, thereby unwittingly providing the criminal elements platforms to shield themselves and perpetrate more crimes, knowing it is not possible to prosecute ethnicity and religion.”

Sani said that somehow, the government was able to subdue the attacks and relative peace returned until very recently when the attacks resurfaced. He said that it was against this backdrop that President Buhari expressed some surprise at the resurgence of the attacks across the nation when a delegation from Niger State paid him courtesy call a few days ago. ACF said that it was, therefore, baffling and bewildering that the honest expression of surprise would earn the president a call by a senator to resign.

Sani continued: “This is most unkind and uncharitable in the sense that there has been substantial reduction of killings since the emergence of the current regime under the watch of President Buhari, however slow. What the government and the armed forces need is not lowering of morale to fight but inspiration by our leaders, especially when regard is paid to the paucity of funds needed for capacity building by way of enough trained and well-equipped security personnel amid competing demands for socioeconomic development.”