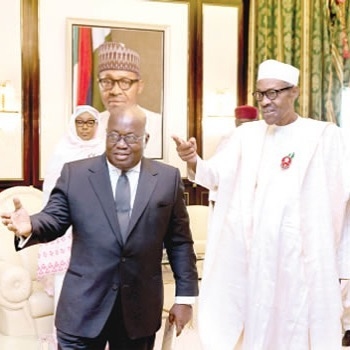 A tale of Buhari, Nana Akufo-Addo and Toyota

Two West African leaders went to Japan last week. Two of them lobbied Toyota to invest in their nations. But Toyota chose to invest in Ghana and snub

Two West African leaders went to Japan last week. Two of them lobbied Toyota to invest in their nations. But Toyota chose to invest in Ghana and snub Nigeria. Why? After all, Nigeria has a greater market than Ghana with her by far larger population. But what is in a HEAD is more important than the SIZE of the HEAD. Toyota snubbed General Buhari of Nigeria and signed with Ghana for a reason.

Only a fool agrees to invest in a country whose President makes CRIMINALS his MINISTERS and makes ACTIVISTS who protest against this him PRISONERS. You can’t be LIFELESS in America, and LIVELY in Japan! You think Toyota will trust their investment to a man whose preferred reading is CARTOONS? GODLINESS is next to CLEANLINESS and CLUELESSNESS is next to LIFELESSNESS!

Akufo-Addo often speaks without reading a speech. He knows what he wants and says it. He does not outsource his government to his Chief of Staff. He is in CHARGE and Toyota knows it! Perhaps Toyota might have invested in Nigeria if our real President, Abba Kyari, had been in Japan, rather than the figure head called General Buhari.

You cannot have a CARTOON loving leader and expect Toyota to invest in your country! Toyota makes CARS, not COMICS. They have done their due diligence. Who will entrust a $180 million investment to a man who opens newspapers and goes straight to the CARTOONS!

It is not only Toyota that snubbed Nigeria for Ghana. Dunlop Nigeria Plc and Michelin Nigeria limited have relocated to Ghana. That already gives Ghana a comparative advantage over Nigeria. But more importantly, good leadership relocated from Nigeria to Ghana in 2017 via Nana Akufo-Addo!
Take something as fundamental to both Nigeria and Ghana as KILLER HERDSMEN. Akufo Addo gave a shoot at sight order. Google it. General Buhari said “giving land for ranching is better than death”. Google it. If you are Toyota, where would you go?

The failure of leadership in Nigeria under General Buhari is so acute that Nigerians now open bank accounts in Ghana and other neighbouring countries in order to safeguard their savings from the ineptitude of General Buhari’s economic policy. An economic policy that orders the Central Bank of Nigeria not to provide foreign exchange for genuine businessmen importers, yet giddily provides forex for pilgrims to Jerusalem and Mecca.

Akufo-Addo is an Oxford and University of Ghana alumnus. Where is General Buhari’s certificate? Even Toyota can’t find it with all their technology. And you want them to invest in such a leader? Are they foolish like those that voted for Buhari?

Before he was executed, the late Major General Mamman Vatsa gave a word of advise to the Nigerian people saying ‘when you start to insult yourself, you will never lack those willing to join you’. Such is the condition Nigeria finds herself with General Buhari. Ghana is laughing at us. How could a nation of people that are the most educated of any immigrant community in the United States end up with a leader like General Buhari, a man whose highest educational qualification is a WAEC certificate and even that is questionable!

The quality of the Gross Domestic product of a nation is in direct proportion to the quality of her leadership. Do you think it is a coincidence that we became Africa’s biggest economy under a PhD holder and went into recession under a man of questionable WAEC status?

I am willing to sponsor the next Guilder Ultimate Search and to triple the winnings if the organisers can make General Buhari’s WAEC certificate the object of the search. Maybe they can achieve what the 11 SANs Buhari hired could not do and unearth his certificate. I am sure the show will end without a WINNER! But until then, do not blame Toyota. Blame yourself for voting in a leader that does not know that West Germany ceased to exist in 1990!

Reno Omokri is a number 1 bestselling author of ‘Facts Versus Fiction: The True Story of the Jonathan Years.’ An avid traveler, he lies to be referred to as a table shaker, a Buhari tormentor, and a sharer of the Gospel.

Loading...
Newer Post
I am not a dollar bill you can pocket – Wike fires at Ganduje
Older Post
R Kelly awaits trial in jail, faces 100 years in prison